‘We need to practise what we preach . . politics is male-dominated, which is not good' 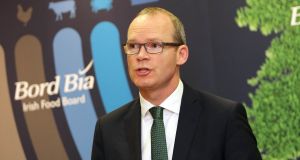 Minister for Agriculture Simon Coveney who said gender quotas were a good thing and necessary to deal with the fact that politics is male dominated.

Minister for Agriculture Simon Coveney has said the Government was correct to introduce gender quotas in order to “force the issue” of increasing the number of women in politics.

A challenge by a Fianna Fáil party activist to the constitutionality of electoral laws on gender quotas is being heard at the High Court on Tuesday.

“We have tried multiple policies since I’ve been in politics over the last 15 years to try and encourage more women into politics and it simply hasn’t worked. So we have to force the issue,” Mr Coveney said.

“Ireland will tell other countries in parts of the developing world and so on that they need to find ways of bringing more women into politics, and we need to practise what we preach.”

Speaking on his way into Cabinet on Tuesday morning, Mr Coveney said the gender quota was an “artificial measure” which would probably be in place for a number of elections.

“At the moment it’s a male-dominated profession, which is not good...There may be some parties who are struggling with this, that’s their problem.”

The High Court challenge is being brought by a Fianna Fáil party activist.

Brian Mohan, a Fianna Fáil area representative in Dublin Central, had hoped to be selected to run for the party in the constituency.

However, a directive from the party’s national constituency commission instructing that only one woman candidate could be selected in that constituency hampered his ambition.

He is being represented by Michael McDowell SC.

Meanwhile, also speaking on his way into Cabinet, Minister for Public Expenditure and Reform Brendan Howlin has said Ireland should have 50:50 gender balance in the Dáil.

“If you look at other parliaments, women are much more broadly represented and we need to move to a 50:50 ratio, and I think measures like the ones the Government has taken will help to achieve that,” Mr Howlin said.