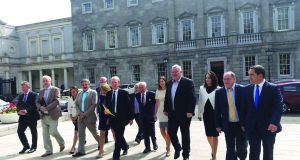 The Independent Alliance said it had a “constructive” meeting with Taoiseach Enda Kenny on Friday and also intends to speak to Fianna Fáil leader Micheál Martin next week about its stance on supporting a new government.

Following last week’s inconclusive election result, Independent Alliance member Shane Ross, TD for Dublin Rathdown, said the group had no preference about whch party it would work with. He said the alliance wanted to see who took its 10 point “charter for change” most seriously and that this was the main focus of the 90 minute meeting with Mr Kenny.

The charter calls for Oireachtas reform, an end to cronyism, prioritising small businesses and addressing the needs of rural Ireland in areas like broadband.

Issues discussed during the meeting included inequality, health services and rural Ireland, alliance members said. Mr Kenny is to respond in detail to the alliance early next week, they added.

Newly elected TD Kevin ‘Boxer’ Moran (Longford-Westmeath) said the alliance did not want to see an “unstable government” emerge and was prepared to work with whoever.

Alliance member John Halligan, TD for Waterford, said it was a “constructive” meeting with Finian McGrath, TD for Dublin Bay North, saying it was a “positive” engagement.

“We believe he has taken it on board and we wait to see his response next week and we look forward to meeting him again maybe next week,” Mr Halligan said.

Mr Ross said he had a couple of calls from Mr Martin and expected to meet him next week. He said he had also spoken to Eamon Ryan of the Green Party.

Mr Martin has started a determined bid to wrest power from Fine Gael. His initial target is to get more support than Mr Kenny in the vote for taoiseach next Thursday. Senior Fianna Fáil sources said on Thursday night that Mr Martin is seeking to build broad support for his campaign to return to government.

He has already initiated the process of trying to get the backing of smaller parties and as many Independent TDs as possible.

Mr Martin has also opened lines of communication with the Social Democrats and the Green Party. “We are not in this for opposition. We want to be in government,” said one senior party figure.

He said the first hurdle to be crossed was to get as much support as possible for the vote next Thursday. “We could win this vote. That’s the aim now. Formation of government can wait,” he added.

Minister for Health Leo Varadkar said it was unlikely that Fine Gael and Fianna Fáil would enter coalition because there was a considerable amount of distrust between both parties and each of them ruled out such an arrangement during the election campaign.

Mr Varadkar also said the Taoiseach has the backing of the Fine Gael parliamentary in any attempt to form a government. “The overwhelming view at the parliamentary party meeting was that the election was a defeat but it wasn’t a rout,” Mr Varadkar told Today with Seán O’Rourke. “We’re the biggest party and Enda Kenny deserves our full support in trying to form a government.”

A number of Independent TDs had informal discussions on Thursday about their own priorities for Dáil reform. Among this group are Noel Grealish, Mattie McGrath, Denis Naughten, Maureen O’Sullivan, Michael Collins and Dr Michael Harty.

Mr Martin has had contact with some of them over the past two days but no formal discussions about Dáil reform or the formation of government.

The Fianna Fáil leader also sought to get in touch with Independent TDs Michael and Danny Healy-Rae to seek their support but does not appear to have been able to make contact to date.

At a meeting of the Fianna Fáil parliamentary party on Thurday, Mr Martin is understood to have told his TDs that there are no red-line issues for the party in negotiations with other parties and groups about the formation of government.

He said key negotiation positions were reforming the Dáil, tackling homelessness and dealing with the problems arising from Irish Water.