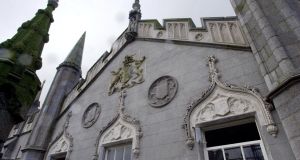 Shelton Abbey prison, Co Wicklow: The Assumption of Our Lady was found there by German artist Günther Reindhl who was in the prison for receiving stolen goods. Photograph: Joe St Leger

A painting by 16th century Italian artist Girolamo Muziano was rediscovered by an imprisoned art restorer at Shelton Abbey, according to documents released by the National Archives.

The Assumption of Our Lady, dated circa 1540, was found by German national Günther Reindhl, according to a letter, from March 1986, sent by the governor of Shelton Abbey Prison in Wicklow to the Department of Justice. It said Reindhl was an artist and art restorer serving two years at the prison for receiving stolen goods.

A second letter, on April 10th, from the Department of Justice prison division to the chief state solicitor at Dublin Castle, said the painting was gifted to Templerainey Church, in Wicklow, by the Earl of Wicklow.

It was removed from the church by a curate during refurbishment work and stored in a garage, but due to damp, the curate “Fr Neenan”, decided to move it to Shelton Abbey.

When Reindhl rediscovered the painting it was in one of the main rooms at the prison. Dr Michael Wynne, from the National Gallery, inspected it on site and concluded it was “probably an original” and could be valuable, the letter said. He estimated it needed restoration, costing up to £10,000 (€12,700).

It was removed to the gallery for safe keeping. Fr JK O’Sullivan, parish priest at Templerainey, had claimed ownership of the painting for the parish, the letter said.

“He has requested its release so that the painting may be sent to London for further appraisal,” it said.

A note also on file, dated April 12th, from the assistant chief state solicitor, said there was “no reason why the painting ought not be released to Fr O’Sullivan”.

A short typed line from the chief state solicitor, added to the end of the copy said, “I agree”.

The Irish Times has been unable to ascertain where the painting is now. It is not in the church at Templerainey or in the National Gallery.