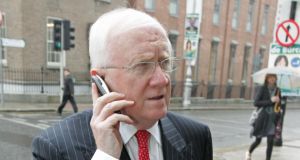 MEP Pat the Cope Gallagher who will contest the Midlands North West constituency for Fianna Fáil. Photograph: The Irish Times

Bar the late entry into the field of an independent candidate with a national profile (and it would be no surprise if that happened), the line up of candidates for the European elections is becoming clearer.

What is less clear is how these candidates will fare in the redrawn constituencies which have been cut from four to three.

The change has necessitated an ungainly carve-up. The Dublin constituency at least makes sense. There is an identifiable geographic locale and a sense of MEPs from there representing the city and its hinterland.

The other two constituencies are the proverbial dog’s dinner, a heterogeneous mish-mash of counties with little historic or cultural connection to each other.

When Roscommon and Longford were yoked together for a while the legendary political fixer from Longford Mickey Doherty pointed to the River Shannon that split the constituency better than the Berlin Wall and uttered: “Votes don’t swim”.

Well the same goes for the smorgasbord of Midlands North West, or the “Malin M50” constituency as political parties are calling it. The constituency comprises 15 counties from three provinces, taking in both the commuterland around Dublin and the most far-flung Atlantic seaboards.

The Munster and South Leinster constituency is also vast has the same difficulties of identity and coherence.

Was there a case to take on board the Green Party suggestion of treating the whole of Ireland as a single constituency for the purpose of these elections?

The latest development in the MNW constituency is the confirmation over the weekend that sitting Fianna Fáil MEP Pat the Cope Gallagher will stand again.

His party’s convention will be held on March 15th and the big question now is who his running mate will be?

It’s a four-seat constituency and Fianna Fáil should comfortably win one seat. Most people in the party believe it is unlikely to take a second.

At the same time, Gallagher is located in the northwest of Donegal and will need a second candidate to help cover the massive geographical area.

His people obviously want a kind of a ‘sweeper’ candidate who will help pick up votes but not be in a position to challenge for a seat.

Gallagher’s camp believes if the second candidate is too strong there is a possibility that the two Fianna Fáil candidates could end up fifth and sixth (without the chance of transferring to each other) and could both be excluded if the final seat is filled without reaching the quota.

Meath senator Thomas Byrne has been pushed hard by senior people in the party to stand and is considering it, though it’s thought he is reluctant.

Obviously, if he was the second candidate Gallagher’s camp would regard it as a threat.

Other names that have been mentioned are the former Kildare South TD Sean Power, a former independent candidate Seanán Ó Coistín, also from Kildare, and the former ICMSA president Pat O’Rourke.

How is it all going to pan out?

Well, as of now, Gallagher and Maireád McGuinness of Fine Gael are the front-runners and should win two seats.

Sinn Féin’s Matt Carthy should also be in a strong position to win a seat (the party has seven TDs and two senators in the region).

The winning of the fourth seat could be a straight contest between independent Marian Harkin and Jim Higgins of Fine Gael, with the transfers of another independent Rónán Mullen being instrumental.

Lorraine Higgins of Labour is a strong candidate but will struggle to keep within distances.

In the southern constituency, the shape of the field is also becoming clear. Fine Gael will run three candidates - Sean Kelly, Deirdre Clune and Simon Harris - and will have high hopes this will translate into two of the four seats.

Harris is a dynamo but the heartbeat of Fine Gael in south Leinster is the farming vote and Harris doesn’t exactly fit that image.

Labour is running MEP Phil Prendergast who has attained a relatively high profile but will struggle as will her party colleagues elsewhere.

Fianna Fáil is holding its convention in Clonmel on Sunday. Already, though, it seems its two candidates will be sitting MEP Brian Crowley (who is sure to be re-elected) and a young trainee barrister Adrian O’Higgins from Kilkenny.

He works as a researcher for the party at present and is highly regarded.

There is a sense that it will be an open race for the third and fourth seats in that constituency and although relatively unknown, that puts Sinn Féin’s Liadh Ní Riada into the reckoning.

I suspect though that we will see a strong farming independent enter the fray and putting in a strong bid for the final seat.

Dublin is a three-seat constituency and the field is all but known at this stage. Brian Hayes of Fine Gael should top the poll, given his profile and the high standing of his party.

But it is too difficult to predict with any certainty at this juncture where the other two seats will go. Labour’s Emer Costello will struggle to hold a seat won by Proinsias de Rossa but the party is stronger in Dublin than elsewhere and she may just hang in. But it’s more likely the seat will go elsewhere.

There are a number of strong candidates who will be in contention for the last two seats. Fianna Fáil’s Mary Fitzpatrick was a rival of Bertie Ahern’s and that should do her no harm in picking up votes from former party supporters who are thinking of returning to the fold. It may not be enough though.

The same sentiments hold for Green Party leader Eamon Ryan. He has a big profile and is well-liked but that might not be enough to see him win through in a very competitive constituency.

Nessa Childers is a sitting MEP for the current East constituency but has chosen to stand in Dublin rather than the new southern constituency. That decision is an intriguing one. She has left the Labour Party and, of course, is a former Green and her candidacy will dent the prospects of both parties. Indeed, Childers could well be in the mix when it comes to second or third place.

Like Costello, the Socialist Party’s Paul Murphy is a substitute candidate but while he has built up a profile, it has nothing like the recognisability of that of Joe Higgins. Sinn Féin’s candidate is Lynn Boylan who was also relatively unknown before entering the race. Despite the party’s rise in support, it is hard at this remove to see her winning a seat.

* An earlier version of this piece omitted any mention Nessa Childers. A reminder that this political correspondent is not omniscient.