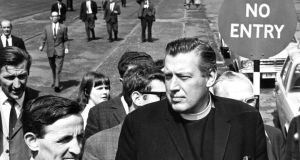 Rev Ian Paisley arriving at Stormont in August of 1969 to protest against the disarming of the Special Constabulary. Photograph: Jimmy McCormac 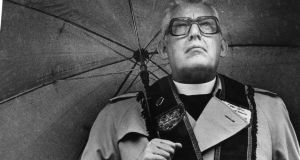 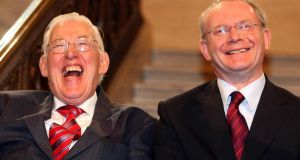 Rev Ian Paisley and Martin McGuinness being sworn in as first and deputy first ministers following a deal struck between the Democratic Unionists and Sinn Fein in March 2007. Photograph: Paul Faith/Pool/PA

Towards the end of his life, Ian Paisley faced up to a crucial truth that separated him from some of his tribe. He accepted Catholics had suffered unionist discrimination in Northern Ireland. For such a big unionist tribal leader that couldn’t have been easy.

It didn’t get the traction it deserved because of nationalist scepticism about his comments and because the media focus was more directed at his opinions of his former deputy and chief ally Peter Robinson whom he portrayed in dark terms.

This all emerged in two BBC programmes, Paisley: Genesis To Revelation – Face To Face With Eamonn Mallie, broadcast in January 2014. The programmes were put together based on interviews Mallie, with his son Michael as producer, carried out over six months from late 2012 to spring 2013.

Any reassessment of Paisley, who died aged 88 on September 12th, must give weight to these interviews because they were given when he knew he was coming to the end of his life. They were to be his last public words and testament, his own final self-reappraisal.

In the second programme, Paisley was in an Old Testament mood for retribution. He sought to exact revenge on Robinson and others in the DUP for forcing him to quit prematurely as Northern Ireland first minister in 2008. And he targeted those who had ousted him from his post as moderator of the Free Presbyterian Church, which he had held for decades. His apocalyptic comparative reference to “the beast” and Robinson was breathtaking in its vindictiveness.

Mallie quizzed him about Dungannon in the early 1960s where no Catholic had been allocated a permanent local authority house for 34 years. How acceptable was that? he asked. “It wasn’t justice at all,” said Paisley. He added those who were party to such discrimination had to carry some of the blame for “what happened to our country”.

Paisley also said Bloody Sunday was wrong, another area where most unionist politicians are reluctant to tread. Some nationalists found his remarks risible. They couldn’t forget the sinister forces Paisley helped to unleash, back in the 1960s, and how that contributed to the Troubles. But his acknowledgment of discrimination was a key moment. Former Ulster Unionist leader David Trimble in his Nobel peace prize acceptance speech had spoken about a “cold house for Catholics” and current UUP leader Mike Nesbitt has also acknowledged there was discrimination, while pointing out it never justified the killings of the IRA.

But here was a fundamentalist powerhouse unionist going where no such evangelical politician had gone before. Paisley partly qualified his comment by justifying his opposition to the civil rights movement in the 1960s, accepting John Hume and Austin Currie were peaceful politicians but nonetheless viewing it ultimately as a vehicle to create a united Ireland.

But that doesn’t negate his central point that if you don’t have democracy you’ll get “anarchy”. Considering the record of the man it was an extraordinary admission. Mallie said this part of the interview was “painful and difficult” for Paisley.

Many nationalists and some unionists, in assessing Paisley, believe it was his ego that persuaded him to share power with Martin McGuinness in the Northern Ireland Executive.

But no other unionist leader could have carried the day in striking the powersharing deal with Gerry Adams in 2007. Such was his autocratic style of leadership no one in the DUP could dare challenge his decision. And what was important too was Paisley did the deal with style, humour and panache, creating a more hopeful and warmer political atmosphere that carried through to a bemused, if not astonished, northern community.

That was a transcendent moment and it did not happen by accident. Yet, it may have been that very generosity of spirit, however belated, that cost him his post as first minister and as moderator of the Free Presbyterian Church he founded in 1951.

“He loved McGuinness too easily, he just loved his company,” said Mallie. “What people forget is that Paisley is quintessentially Irish; he could not conceal it. When he got close to people like McGuinness, he could not control his empathy.”

But this appalled some of the evangelicals in the Free Presbyterian Church and in the church wing of the DUP. Mallie explained how one of the Paisley nay-sayers provided biblical explanation of why they were so aghast, quoting from 2 Corinthians 6:14-18: “Be ye not unequally yoked together with unbelievers: for what fellowship hath righteousness with unrighteousness and what communion hath light with darkness?”

Paisley took that argument: previously he had requested “sackcloth and ashes” from republicans but now he accepted IRA decommissioning and also Sinn Féin signing up to policing and the criminal justice system as a manifestation of repentance. In conscience, Paisley could do the deal. So he did. He and McGuinness were in post together for barely 13 months. Their “Chuckle Brothers” routine was lampooned but it was genuine. It pointed to potential for co-operation and healing and putting the past to the periphery without forgetting it. But now that Paisley’s gone those qualities are missing.

There will always be conflicting opinions on Paisley. But, in the end, can anyone really challenge the redemptive nature of what he helped achieve?