How will the floods affect general election results?

Conor Pope reports from Golden Island, a small rural community near Athlone which has been isolated by the floods and is struggling to survive in appalling conditions. Video: Bryan O'Brien

Conor Pope visits the Strand area beside the river Shannon in Athlone where local residents are just about keeping flood waters at bay using pumps and sandbags. Video: Bryan O'Brien 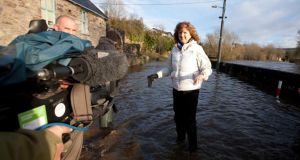 Joan Burton in Thomastown, Co Kilkenny. The general election is just weeks away and Government TDs could be expected to be fretting over whether the tardiness of the Coalition response will cost them votes. But not many are. Photo: RollingNews.ie

One of the arguments made by proponents of a November election was that unexpected events in the depths of winter could knock the Government off course, causing avoidable political damage.

The obvious danger seemed to be a hospital crisis and overcrowded accident and emergency wards, which have duly come to pass, but widespread flooding over a sustained period of weeks has exercised the Coalition most.

The general election is just weeks away and Government TDs could be expected to be fretting over whether the tardiness of the Coalition response will cost them votes.

But not many are. Opposition deputies also say the floods are unlikely to inflict much damage at the ballot box.

“I can’t see it being detrimental to a government to be honest. You can’t fix it today or tomorrow. I can’t go out and say I am going to wave a wand and fix the floods.”

However, Fitzmaurice said all politicians needed to be honest about what could be done, which he says is “common sense” and putting the “common good” ahead of European rules on areas such as Special Areas of Conservation.

“It’ll be a general election issue for the homes that are affected,” said one, pointing out that about 200 homes were flooded in Athlone, one of the worst-affected towns.

“That’s in a constituency [Longford-Westmeath] with an electorate of 90,000. It’s going to have an impact but not a huge one.”

Clare Fianna Fáil TD Timmy Dooley said there was still concern among those whose homes were not affected. “I was canvassing from Killala and back on Saturday and I found a lot of people anxious about it. People do feel that the Government wasn’t quick enough to deal with the issue.”

Government TDs also feel that community spirit and stoicism overrode other emotions, but acknowledge that could change if there are further floods.

“If people got another belt of it in the next while, the public mood could change,” said one.

The sharpest political criticisms were made in the days between Christmas and the new year, with calls for Taoiseach Enda Kenny to visit the worst-affected areas.

Some put Kenny’s absence down to illness, while Simon Harris, the Minister of State with responsibility for the Office of Public Works, said Kenny wasn’t going “to do a Bertie Ahern”, who was famously pictured in his wellies. Except that Kenny was doing precisely that the very next day, after he completed a helicopter tour over the affected areas.

The Government insisted the Taoiseach had already visited areas in his home county of Mayo but the Opposition said he needed to go and see towns elsewhere. Blunting such criticism, it later transpired that Micheál Martin had stayed in Cork. Gerry Adams said whistle-stop tours by politicians to flood-hit areas could be “insulting”, comments made, naturally, while he was on a tour to flooded areas in the midwest.

An Opposition deputy said “it depends on what you show up for”.

“If you are there to help find engineers, help with relief forms for social welfare – the real clientelist stuff – then you are welcome. But if there is somebody there just for a photograph, well that is not a good place to be.”

Coalition sources say ministerial visits were valuable because locals told the Government what needed to be done, which fed directly into the Cabinet response announced this week.

However, the public’s relatively tolerant attitude towards politicians will not last if the State is found wanting in the event of another round of flooding similar to this winter’s and that seen in 2009.

Paul Connaughton, Fine Gael TD for Galway East, said: “In ’09, people were told this was a [once in a ]100-year event, but now, with climate change, there is a sense that’s not the case.”