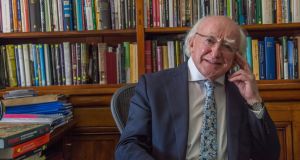 Although the next election is two years away, political parties are in no doubt President Michael D Higgins’s campaign for a second term is under way, writes Michael O’Regan, Parliamentary Correspondent.

The publication of a book of his speeches, newspaper interviews, and a highly successful appearance on RTÉ’s The Late Late Show, are viewed by the political professionals in Leinster House as a skilful testing of the waters by a consummate politician to determine his chances of a further seven years in Leinster House when his term ends in October 2018.

“Michael D is an academic, poet and intellectual, ‘’ said a former Dáil colleague.

“He is also a very clever politician who painstakingly carved a Dáil seat in Galway West when it was not easily done and held on to it.’’

Higgins’s pledge to serve just one term is dismissed by TDs. “Politicians do U-turns all the time,’’ said a long-serving Government TD.

“He is popular with the public, because he can say the rights things without being asked to deliver on them.’’

Asked if he would run for a second term if he was elected, Higgins replied: “One can never predict the love of the people.’’

Although the current Government’s fragility is uppermost in TDs’s minds, there is speculation about what will happen when the next presidential election comes around.

As outgoing President, Higgins can nominate himself, and he is assured of the support of his old party, Labour.

In such circumstances, Fine Gael and Fianna Fáil could face a dilemma. Would it be politically worthwhile opposing a highly popular outgoing President, risking defeat and having to meet the considerable cost involved ?

Minister for Social Protection Leo Varadkar was thinking aloud for some of his colleagues when he said last June that Higgins would have “broad cross-party support’’ if he sought a second term.

However, recognising political reality, he did add it was too early to say if other candidates might emerge.

Whatever about Fine Gael and Fianna Fáil, Sinn Féin would be very likely to field a candidate, given its Dáil and Seanad strength.

“It would probably be somebody of a like-minded view to us,’’ said a Sinn Féin source.

“I don’t think we would run one of our own again, as we did with Martin McGuinness the last time.’’

The so-called “hard left’’ has dismissed the possibility of running a candidate for the presidency.

“If we got somebody from our group got elected, he or she would be expected to perhaps not sign a controversial Bill,’’ said a source .”How could they do that and not resign ?’’

A Fine Gael Minister remarked. “I think Michael D will probably get a second term. It is not a huge issue among my constituents; people like him and he does the job well.’’