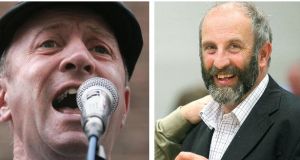 Michael and Danny Healy-Rae are on the cusp on being returned to Dáil Éireann. Photographs: The Irish Times

The Healy-Rae brothers look set to pull off a coup in Kerry by taking two seats in the new five-seat constituency, a poll conducted for TG4 indicates.

The Ipsos MRBI survey for for channel’s Seacht Lá programme shows Michael Healy-Rae with support of 33 per cent, more than twice the quota.

With his brother Danny Healy-Rae on 4 per cent, a vote-management strategy could result in both brothers taking a seat.

The other big surprise is that the poll indicates Sinn Féin TD Martin Ferris, who has been considered a certainty, may struggle.

The findings show his support at 7 per cent, one point behind Labour Party TD Arthur Spring.

The two Fine Gael candidates, Jimmy Deenihan and Brendan Griffin, are on 13 per cent each. If they succeed in splitting the Fine Gael vote along similar lines on February 26th, both have a strong chance of election.

Fianna Fáil candidate John Brassil lies in fifth place with 11 per cent of the vote. His running mate Norma Moriarty is on 6 per cent. In that scenario, Mr Brassil would likely take a seat on the back of transfers from his colleague.

The decision by the Healy-Raes to add Danny’s name as a candidate seems to be vindicated based on these findings. But his brother Michael would have to be willing to cede some of his huge tally of first preferences to his brother. The Independent TD and his councillor brother have appealed to their supporters in the east of the county to favour Danny.

The low showing for Mr Ferris represents a a big surprise as it comes at a time when Sinn Féin’s support nationally is on the rise. It is clear that some of his support base has been lost to the Healy-Rae machine.

The poll was conducted on Thursday and Friday last week among 500 adults throughout Kerry. Danny Healy-Rae announced his candidature on Thursday morning so the poll was in a position to gauge the levels of support he was attracting.

Constituency by the numbers