Greens on a recovery trail 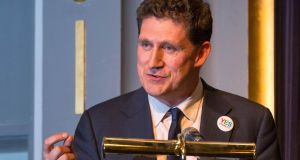 In 2011, the two parties that had been in coalition for the previous three and a half years took a huge hiding. It was a disaster for Fianna Fáil. But disaster is only the beginning of describing the fate that befell the Green Party.

All of the party’s six TDs lost their seats. The earlier local election of 2009 seen the party’s number of county and city councillors sheared from 16 to three. To compound its difficulties, the Greens failed to achieve 2 per cent of the national vote, the minimum threshold for State funding.

In the previous Dáil, another party which had an electoral meltdown - the PDs - had failed to survive after its representation had fallen to two.

It may take some time before the Greens achieves the electoral results it did in the middle 2000s. But there is no doubt that the party is on a recovery path. That is evident from its national conference in Kilkenny this weekend. The party was last here in Kilkenny two years ago. Then the attendance was low as was the atmosphere and morale. This weekend is markedly different.

Encouraged by a relatively good local election campaign last year, where the party won 12 council seats around the country, the prose is more bold, more confident, and more heightened. There was a much bigger crowd too, but that is still only a few hundred. Some are veteran from when the party was the Ecological Party 40 years ago - but most are young and the party seems to have a higher proportion of female activists and representatives than most others.

“Ironically not having State funding and having challenges has brought out the resilient and sustainable best in us,” deputy leader Catherine Martin told delegates.

The conference has been full of new ideas and policies that reflect this era in which the country is recovering from recession - some of them are practical and eye-catching; some are utopian and just ain’t going to happen.

What impact will the party make nationally? Some, but possibly nowhere as much as the collection of independents under the cloak of Shane Ross that have been meeting in Tullamore this weekend. The party has a relatively good chance of winning a handful of seats in the general election next year (all in Dublin constituencies). It is likely if they do it will be sneaking in for the last seat with party leader Eamon Ryan.

Without live TV coverage, Ryan’s address was low key and did not have the ornamented prose we expect form such set pieces.

He set out the party’s position on the two topics du jour - the same sex marriage referendum and the legacy of the 1916 rising. Unsurprisingly, it was Yes on the first; on the latter, he said the proclamation was a “turning point, our Bastille moment, our Boston Tea Party”.

He set out what those proclamation values should be in the modern political context: no false promises; an education system that was more that what Patrick Pearse descried as a “murder machine”; a new green industrial revolution; a revival of social and economic life in rural Ireland, and reform of the banking system.

Surprisingly, there were no explicit references to climate change, either the legislation currently going through the Dáil, or the wider global issue.

Most of the ideas expressed in the speech were not the big abstract ones; rather ones that were practical and local, some of which you suspected hankered after an Ireland that no longer exists.

Rejecting the left and right distinctions in Irish politics he said that guiding principle of his part was that all decision should be taken at the lowest effective level.

The examples of that included restoring power to local bank managers, who know their customers, rather than centrally. It included also reviving post offices into digital communications hubs where families could store all their data and photo, over many generations. It sounds alluring but you wonder could it ever fly?

The most interesting concept was a public banking model, larger than the credit unions but smaller than the existing banks. There would be ten regional banks, each owned by local authorities, with a capital base of €100. All the deposits raised in the region would remain in the region. He said such not-for-profit banks could transform life in the regions - lending money to small sustainable tourism companies; providing finance to sustainable food companies, which could deliver another of his big projects, the provision of fresh and healthy dinners to each primary school child in the country each day.

“That’s not a pipe dream. It’s worked elsewhere,” he said. It was not surprising the idea was enthusiastically received by the delegates.

They would also be able to provide loans to small builders to provide house retrofitting systems.

The ideas for the use of the loans all fed into the Green Party agenda. But what was interesting was the disclosure that Ryan and Louth councillor Mark Dearey have already approached the Minister for Finance Michael Noonan about the idea. They say he has been impressed with the idea and has commissioned a feasibility study.

The party has not gone above very low single figures (often as low as 1 or 2 per cent) in national polls, although its support in Dublin is a little higher. Other non-traditional parties have a stronger profile and more support at present. But unlike the PDs, the Greens have managed to survive and are on a bit of a comeback trail.