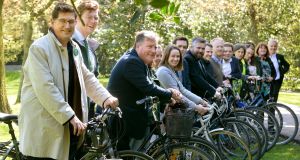 Even after the bruising that followed the Greens pairing up with Fianna Fáil in 2007, the predominant view in the party is that it should go back into coalition. File photograph: Dara Mac Donaill/The Irish Times.

This weekend’s gathering of Green Party public representatives in Cork followed the party’s biggest ever electoral success. The afterglow of its stong local and European election performance in May has not fully faded yet.

The difficulty for the party is this: a general election is not taking place tomorrow. Or anytime soon for that matter. Taoiseach Leo Varadkar is saying next May and most parties are working on that assumption, unless there is a force majeure.

That leaves a lot of time for other parties to figure out strategies to deal with the Greens. And the impact of Brexit may relegate climate change as a priority for some voters. The lesson of all this for the Greens is that there is not a linear progression from May’s success to the general election.

All that said, climate change is a zeitgeist issue right now and is likely to continue to be so into the future. Therefore, there is an obvious potential for the party to make gains in the next general election, and right now, no other party is poised to make such big advances.

Even after the bruising that followed the Greens pairing up with Fianna Fáil in 2007, the predominant view in the party is that it should go back into coalition.

That view was settled at its national convention during the summer when motions tabled to rule out coalition with Fine Gael or Fianna Fáil, or to identify the party as an explicitly anti-capitalist party, were defeated.

There is, however, still a radical wing in the party, nowadays identified with younger members like Lorna Bogue and Saoirse McHugh.

When you leaf through the party’s recent manifestos you can still see evidence of its Ecological Party roots. It still wants to eliminate fossil fuels, deliver a basic wage, encourage community or cooperative ownership of smaller businesses and move away from the obsession with economic growth in favour of sustainability.

But like the German Greens, which has always been its lodestar, the party is now slightly left-of-centre, or even centrist, focused on sensible solutions and compromises rather than impossible Don Quixote quests. Over the years it has learned to recognise the social dimension to climate change polices.

Thus, it is putting a lot of emphasis on a just transition to a more sustainable society, ensuring the most vulnerable don’t lose out. Another big policy initiative is one that it sees as a win-win - a big drive towards afforestation. That’s not just big forests, but a drive to get every farmer in the country, all 120,000 of them, to plant a hectare of forestry. Initaitives like this, it has argued, would provide better supports to farming than propping up beef farming, while helping to reduce emissoins.

The Green New Deal is its other policy theme. It argues that investment in forestry, transport, insulation and renewable energy can be profitable as well as sustainable.

So what are the party’s prospects? Well, the success it had in the European and local elections does not necessarily translate into Dáil seats. People vote for different reasons in second-tier elections. When the party did well in those elections in the past, it did just so-so in general elections.

However, it argues with credibility that prevailing circumstances have changed and climate change is now a core issue. That’s reflected by the rush among its rivals to appropriate green policies.

So its 49 council seats should reap dividends next May. While the overall national share of the vote is a modest 5.6 per cent, the party gets double digit support in the middle-class urban and suburban areas where it is strongest.

There is scope in Dublin Bay North, Dublin Fingal, Dublin South West, Dublin Central, Galway West, Cork South Central, Kildare North, Waterford and perhaps Limerick City and Clare. And there is a potential dark horse in the shape of McHugh, the likely Green candidate in Mayo

Party leader Eamon Ryan has said his target is six seats but the party is likely to do better, perhaps winning eight seat, maybe even more.

Its delegates told The Irish Times that any coalition arrangement would see the Greens make big demands for policies on climate change and sustainability, and that it would no longer tolerate anything that tinkered around the edges.