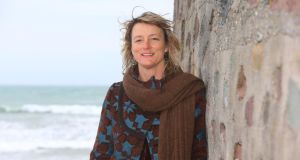 Grace O’Sullivan on Tramore beach in Co Waterford. “As an Irish person and an environmental person I look towards Europe.” Photograph: Patrick Browne


Former Greenpeace activist turned would-be politician Grace O’Sullivan has admitted she was reluctant to join the electoral fray when asked to run for the Green Party but now believes she has a realistic chance of entering the European Parliament following this month’s elections.

A 6 per cent level of support in a recent opinion poll has put her in the frame for the fourth seat in the South constituency, says the Tramore-based candidate who finds herself running for election at the same time as her sister, Lola O’Sullivan, albeit in a different contest and for a different party.

Grace O’Sullivan is on the European Parliament trail for the Greens, while her sister aims to hold on to her position as a Fine Gael member of Waterford County Council.

“We’ve hardly crossed paths,” the Green candidate says, pointing out the difference in their campaigns and target areas. She must criss-cross an electoral area totalling 10 counties across the south of the country.

“My constituency is so big. It’s literally ships passing in the night.”

The fact that they’re running for different parties is “interesting”, she concedes. “We’re a family of 10, including my parents, and in that kitchen growing up you’d hear all kinds of opinions on everything.”

Four months
While over 30 years of her life have been spent campaigning on environmental issues, her involvement in party politics stretches back just four months.

“It was really very difficult to make a decision, particularly because of the sense of apathy in Ireland and the disillusionment with the political system,” O’Sullivan, a field ecologist by profession and former Irish surf champion, says of the moment in January when Green Party leader Eamon Ryan asked her to stand.

“I had to give it serious consideration. My own family and my children were super-excited and saying, ‘go for it Mum’, but others were saying, ‘how could you do it’. I looked at the history of the Green Party and looked at the fact that they were really decimated in the last election, but the environmental issues are as important now as they’ve ever been...You take your chances. I think I’m a really good candidate.”

She points out that while the Greens may well have lost all their Dáil seats in the last general election, on an EU-wide basis they are the fourth largest grouping in the European Parliament.

This is what attracted her to running in this contest rather than the local election.

“As an Irish person and an environmental person I look towards Europe. There’s a Green bloc there... [and] I feel strongly I’d be a strong political activist and that’s what we need. I want the Irish people to know what their MEPs are doing because we don’t know what they’re doing at the moment.”

The Greens may have been written off by many observers in this country but, according to O’Sullivan, she is in the mix.

“Six per cent in the Red C poll? That’s great. That puts me in for the fourth seat.”

If successful, taking a seat in the parliament would be a long way from the Rainbow Warrior, which she was aboard in the 1980s at a time when the Greenpeace ship and its volunteers were battling the French authorities.

“I was held as a prisoner for seven days aboard a French frigate in French Polynesia, trying to prevent nuclear testing. It was a French military ship off the island of Hao, and then I was flown from Tahiti back to Ireland.”

Another veteran of environmental campaigns, Duncan Stewart, has lent his support to her campaign having himself flirted with the idea of running for the European Parliament, and was on hand along with former Green Party leader Trevor Sargent to officially launch her candidacy last Friday night in Tramore. Stewart described her track record in environmental and social justice campaigning as “impeccable”.

Committee
She herself hopes that record is good enough for voters on May 23th. “I would love this time next month to be sitting in the European Parliament on the environment, public health and food safety committee. I would absolutely love to be on that committee. When I say I’ll deliver, I’ll deliver.”