Department of Finance says 50c levy on every 10ml of liquid could yield €8.3m annually 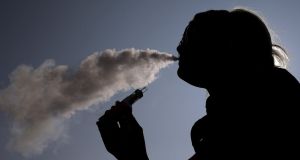 Four EU member states – Portugal, Italy, Romania and Slovenia – have introduced taxes on e-cigarettes, or on the liquid used in them

The Government has been told to consider introducing a levy on the liquid used in e-cigarettes.

The Department of Finance says a levy of 50 cent on every 10ml of the liquid used in the products, which are largely used by people attempting to quit smoking, could yield €8.3 million annually.

The proposal is included in a tax strategy paper published by the department which outlines a number of options in the area of excise duty.

“However, the implementation and collection of such a tax would be difficult given the wide variety of ways in which these products are supplied to the consumer,” the department says. “Secondly, as previously stated, many sources consider e-cigarettes to be a cessation tool and certainly less harmful than cigarettes.”

However, former minister for children James Reilly raised concern about their effects late last year and insisted action would be required if evidence of them being damaging to health emerged.

It will also prohibit the sale of non-medicinal nicotine delivery systems, including e-cigarettes, by and to persons under 18 years.

The tax strategy paper says Ireland has the second-highest excise duty on tobacco-related products in the European Union.

However, the Department of Finance said: “It should be noted the Revenue Commissioners have expressed concerns that increases in excise may not lead to increased yields, as consumers are further incentivised to exit the tobacco products market in Ireland.”