Government to hold up to half a dozen referendums next year 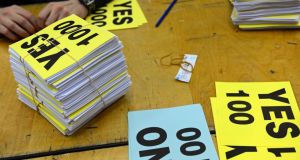 “The Government is looking at holding at least three and possibly five (or more) referendums in 2015,” documents submitted to the Minister for the Environment state. Photograph: Eric Luke

The Department of the Environment expects that several referendums could be held next year, according to briefing documents submitted to new Minister for the Environment Alan Kelly.

“The Government is looking at holding at least three and possibly five (or more) referendums in 2015,” the documents state.

Three referendums recommended by the constitutional convention will be held next spring: reducing the voting age to 16, reducing the age barrier for presidential candidates from the current 35, and allowing same-sex marriage.

While no firm date has been set, the Bills for these three would have to be passed by the Oireachtas by February 27th “at the latest” if the votes were to be held before Easter, according to the documents.

A fourth referendum could be held on the establishment of a unified patent court – a common court dealing with patent and intellectual property law which would be open for participation of all member states of the European Union. A fifth referendum is referenced in the briefing notes, but subsequent details are redacted.

The constitutional convention proposed other reforms and, the documents state it is possible that three more referendums could held. Most emphasis is put in the documents on a referendum on article 41.2 of the Constitution which refers to the role of “women in the home”.

The Department of Justice is to report back to the Government by the end of October on the wording of an amendment .

Others most likely to be held would be a referendum on the removal of the offence of blasphemy from the Constitution, and one on voting rights in presidential elections for citizens living outside the State.