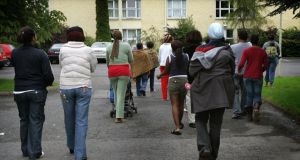 Refugees at an asylum centre near Portlaoise: At present asylum seekers can go through four stages before a decision on their application is finalised. Photograph: The Irish Times

A new “fast track” system for asylum seekers in direct provision for more than five years, which would see their cases dealt with within six months, is set to be announced by the Government.

The measures to deal with the asylum system are also likely to include increased cash allowances for those in direction provision.

Both moves are under consideration by an independent group assessing improvements to supports for asylum seekers, including the direct provision system.

The group was established by Minister for Justice Frances Fitzgerald and Minister of State in the Department of Justice Aodhán Ó Riordáin and its report is expected to be published next month.

The measures, combined with a Bill Ms Fitzgerald brought through Cabinet last month reforming the asylum-application system, are being pitched as a twin-track approach to improve the asylum process.

While awaiting a decision on whether they will be granted refugee status, asylum seekers are housed in direct provision accommodation, where they are given meals and an allowance of €19.10 a week, but are prohibited from taking paid work. More than 4,400 people live in 34 accommodation centres. About a third are children.

Mr Ó Riordáin last week told an Oireachtas committee 21 per cent of those residents had been in the system for seven years or more. The average length of stay is four years.

Well-placed sources told The Irish Times the new proposals would focus on those in the system for five years or more, and would include a “fast track” system which will see their cases dealt with within six months.

It understood Ministers have concluded that having people waiting more than five years in the system is unsustainable. However, while saying those affected would be given a “very sympathetic hearing”, one source stressed it would stop short of a full amnesty.

Under the International Protection Bill brought to Cabinet by Ms Fitzgerald last month, there will be one opportunity to have an asylum case heard and one right of appeal.

At present asylum seekers can go through four stages before a decision on their application is finalised, and the decision can then be appealed to the High Court, where there are further delays.