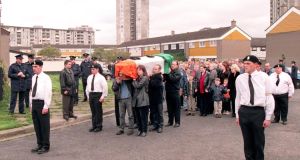 The funeral of Mr Ronan Mac Lochlainn in Ballymun in 1998.

The Government is to consider establishing another commission of investigation into a justice controversy – the shooting dead by gardaí of a dissident republican who was attempting to rob a Securicor van 16 years ago.

Attorney General Máire Whelan will advise the Cabinet at its weekly meeting today that it may have to establish an inquiry into the death of Ronan Mac Lochlainn, who was shot and killed by a member of An Garda Síochána in May 1998.

Mac Lochlainn was part of a gang of six people mounting an armed robbery in Ashford, Co Wicklow. Evidence before an inquest into his death was that while he was in possession of a revolver at the time, no shots were fired by the robbers while 12 were fired by three gardaí.

From Ballymun, he was 28 at the time of his death, and the robbery was staged during the “blue flu” Garda protest, with the gang armed with assault rifles, shotguns and handguns, as well as an AK47.

The fatal shot was fired by a garda who himself was killed in the course of duty a number of years later, and the robbery was prevented due to a surveillance operation by the Emergency Response Unit.

Mac Lochlainn’s partner Gráinne Nic Gibb took a case to the European Court of Human Rights (ECHR), alleging the investigation into the death had not satisfied the requirements of the European Convention on Human Rights. The Government proposed holding a one-person commission of investigation into the killing to the ECHR, and Ms Whelan is to advise the Cabinet today on how to proceed following a decision by the court in March.

The Government submission to the ECHR accepted “an effective official investigation into the death . . . has not yet occurred” and also contained draft terms of reference.

If the Government proceeds with the inquiry, it will follow those set up to examine the Garda taping controversy and mother and baby homes, the scope of which will also be discussed today.

Ms Nic Gibb has also sought damages from the State on the grounds that it was an unlawful, wrongful and intentional killing and assault, and for negligence and breach of duty.

The jury returned a verdict of death by misadventure.