Young people will return to live and work in Ireland as economy recovers, says Noonan 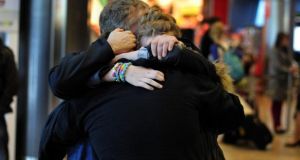 More people will be moving to Ireland than emigrating by 2017 as the number of Irish people returning from abroad increases, the Government has predicted.

Speaking during today’s spring economic statement, Minister for Finance Michael Noonan said next year would mark the end of “net outward migration”, with a “return to net inward migration” by 2017.

“The young people who have left are coming back and will continue to do so,” he said, citing a “jobs-rich recovery” as the main factor.

If the Government’s projections are correct, the next two years will mark a reverse in the extended spell of mass emigration which has seen hundreds of thousands of Irish citizens and foreign nationals leave the country in recent years.

Between 2008 and 2014, a quarter of a million Irish people moved abroad, Central Statistics Office figures show, with a further 300,000 people of other nationalities leaving the country in the same period.

The gap between the numbers leaving Ireland and arriving here (the net outward migration rate) has already begun to narrow however, falling 35 per cent to 21,400 in the year to April 2014, the latest date for which CSO figures are available.

Mr Noonan said planned cuts to income tax and the Universal Social Charge (USC) over the next five years, outlined in today’s statement, would “put more money into people’s pockets” and “encourage young Irish people who are working overseas in good jobs to return home, confident that they will be able to find well paid jobs in Ireland”.

But Sinn Féin Senator Kathryn Reilly said today’s statement did not contain any measures to address the “barriers” which prevent emigrants from returning, namely “poor infrastructure, precarious working conditions and low pay, lack of career opportunities and progression and a lack of affordable housing”.

Green Party finance spokesman Cllr Mark Dearey said the biggest blocks preventing emigrants returning “is the ability to get an affordable home, close to where they will work, and the lack of the same health and educational services they avail of in Australia, Canada or the UK”.

“Rather than promising them tax cuts we need to convince them we can get the planning of those building blocks of our society right,” he said.