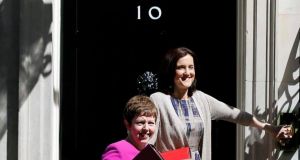 Theresa Villiers (top, with Lady Tina Stowell, leader of House of Lords) the Northern Ireland secretary at 10 Downing Street: David Cameron previously pledged to scrap the UK’s Human Rights Act and his majority makes it easier for him to do so. Photograph: Suzanne Plunkett/Reuters

The Government has serious concerns that London could breach the terms of the Belfast Agreement if prime minister David Cameron carries through on a pledge to scrap the UK’s Human Rights Act.

Minister for Foreign Affairs Charlie Flanagan said any British plans to repeal the Act and curtail the role of the European Court of Human Rights would be “a matter of some concern” and will raise the issue at a meeting with Northern Ireland Secretary Theresa Villiers.

Irish officials privately fear scrapping the Act could have major implications for the Belfast Agreement and related bilateral deals between the UK and Ireland. They believe the Tories’ overall majority has made repeal more likely.

This has provoked alarm in Dublin and Belfast, where the agreement’s human rights provisions are seen as having been key to winning nationalist support for the deal. The Irish Human Rights and Equality Commission said it was “monitoring developments” while its sister commission in Northern Ireland said the British move was “deeply concerning”.

Mr Flanagan said the protection of human rights, predicated on the European convention, was “one of the key principles” underpinning the accord. “As a guarantor of the Good Friday agreement, the Irish Government takes very seriously our responsibility to safeguard the agreement. The fundamental role of human rights in guaranteeing peace and stability in Northern Ireland must be fully respected,” he said.

Sinn Féin president Gerry Adams warned that the plan to repeal the act was “a direct attack” on the Belfast Agreement and called on Taoiseach Enda Kenny to urgently raise the matter with Mr Cameron.