Gilmore must plough on and minimise damage on May 23rd 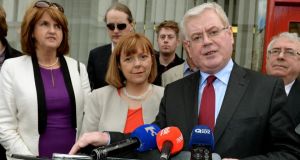 Labour’s campaign for next month’s elections could hardly have got off to a worse start. At issue in the next four weeks is whether Tánaiste Eamon Gilmore can steady nerves in the party and salvage enough on May 23rd make the doubters go away. Easy, it will not be.

An unanticipated broadside from South MEP Phil Prendergast has greatly raised the stakes for the Tánaiste and his allies. At a time when an already difficult campaign should be gaining momentum, the leadership has been thrust into an unwelcome defensive posture. In the face of a grave electoral threat, the risk is that this becomes self-perpetuating.

It all serves to illustrate how frail the party’s position is as it comes under attack in its heartland from Sinn Féin and an array of hard-left candidates. Although Labour is on the cusp of a reasonable outcome at Cabinet tomorrow in its wrangle with Fine Gael over water charges, the question is overshadowed by the leadership question.

To be fair, Gilmore is not the only party leader under pressure at the moment. Any failure by Fianna Fáil to make the breakthrough it badly needs in Dublin would create difficulty for Mícheál Martin. Similarly, Taoiseach Enda Kenny is looking the worse for wear over a string of badly managed controversies since the start of the year.

But it is the Labour leader’s woes which dominate right now. Predictably enough, Prendergast’s immediate attack was spurned. But her public call for deputy leader Joan Burton to replace Gilmore resonated strongly with internal critics of the regime.

To date only Carlow-Kilkenny TD Ann Phelan has come out publicly to acknowledge that Gilmore’s leadership is on the agenda in this election, but such sentiments are echoed privately by others in the parliamentary party. Critics insist there is no cabal furtively working to unseat the leader, but they fear a nightmare result next month. In that event, Darwinian self-preservation would be expected to take hold of TDs who see their own Dáil seats jeopardised in 2016.

Is there any way out? For one thing, Dublin candidate Emer Costello would need to recapture the European seat won last time out by Proinsias de Rossa. This is recognised to be the only winnable seat for Labour in the European contest, but it remains an exceedingly difficult task, and recent polls are not encouraging. If a rejectionist public groundswell is such that the Government parties take only one of the three Dublin seats, then Brian Hayes of Fine Gael would be the clear favourite.

For another, Labour would need to minimise the damage at local level. Again, the going here will be tough for this is the forum in which disaffected voters can vent their frustration up close.

The irony in all this is that Prendergast is but a substitute MEP with little real prospect of election. Still, she has struck a chord and struck it loudly. Gilmore has no choice but to plough on but it will be quite a struggle.

1 Covid-19: One death and 363 further cases confirmed in State
2 ‘Insane’ gathering of hundreds of students in Galway condemned
3 Speed and distance of Covid-19 droplets tracked by Mater researchers
4 Irish, German and Italian contact-tracing apps to be linked in bid for ‘safer’ travel
5 Home of The O’Rahilly should not have been demolished, Taoiseach says
Real news has value SUBSCRIBE