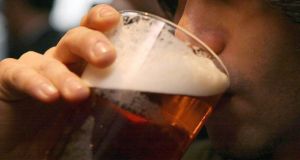 Tánaiste and Minister for Foreign Affairs Eamon Gilmore has appealed to people to avoid the excessive drinking that sometimes mars St Patrick’s Day celebrations because it casts Ireland in a bad light.

Mr Gilmore said the national day should be an enjoyable occasion for all but criticised a minority of revellers who engaged in on-street alcohol consumption.

“I think that people should enjoy St Patrick’s Day but I would appeal to people to avoid the kind of excesses that we have sometimes seen, particularly the kind of drinking in public places, on the streets and so on,” he said.

“It has to be said we are talking here about a minority of people who would engage in that but it does cast a bad light on the country. St Patrick’s Day is an opportunity to cast the country in a good light and I think that we all have a responsibility to do that.”

Mr Gilmore was speaking at the announcement that 20 Government representatives will travel abroad to represent Ireland. While a particular emphasis will be put on the US, European capitals and emerging markets such as Indonesia and the Philippines will also be destinations, with Saudi Arabia another first-time location. Last year, 17 Ministers travelled, close to double the 2011 figure.

Mr Gilmore insisted that costs would be kept to a minimum and Minister for Jobs Richard Bruton confirmed no first-class flights would be taken. “We’re taking advantage of the very considerable goodwill that there is interationally towards Ireland... There is no other country of our size that gets the same attention internationally for its national day as Ireland does,” Mr Gilmore said.

The Government Chief Whip Paul Kehoe will go to Australia and New Zealand and the Attorney General Maire Whelan to France.

Canada is the destination for Minister for Arts Jimmy Deenihan while Minister for Public Expenditure and Reform Brendan Howlin heads to Singapore, Indonesia and the Philipines.

Taoiseach Enda Kenny will take in Washington, New York, Seattle and Silicon Valley on his trip, while Mr Gilmore visits Atlanta, New Orleans and Washington. Minister for Finance Michael Noonan will be the most senior Minister to remain at home and will in effect be left in charge of the State.

Man dead in ‘superloo’ for up to 20 hours before discovery 16:39
Mother of three McGinley children to appear in court 15:40
Injunction lifted as row over dog track protests resolved 15:28
‘Excuse of ignorance’ not open to ex-tax inspector jailed for not filing returns 15:19
Road traffic prosecution against Conor McGregor struck out 15:07
SUBSCRIBER ONLY