Ghosts of squabbles past haunt Gilmore

Eamon Gilmore has woman trouble from present and former candidates 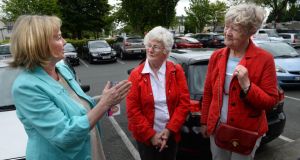 There is nothing new about bust-ups in the Labour Party.

When it comes to infighting and the European elections, it is almost a grand tradition now in the female wing.

This time around, Eamon Gilmore is the leader trying to cope with the latest outbreak.

He’s having an Ebenezer Scrooge experience, haunted by visitations from the ghosts of squabbles past, present and, most worrying of all for him, future.

The past stalks him and his Dublin candidate Emer Costello throughout this campaign. Nessa Childers, who won a seat for Labour last time out but left the party following acrimonious disputes with the leadership, is now running as an Independent.

She is ahead of Costello in the opinion polls with a decent chance of landing the prize. As we saw on a canvass with her in south Dublin yesterday, abandoning the mother ship is doing her no harm at all.

Meanwhile, there was a real blast from the past at Labour’s manifesto launch in the afternoon.

None other than Bernie Malone, who fought a titanic battle with headquarters favourite Orla Guerin during the 1994 European elections. Bernie won the seat. Orla has gone on to a distinguished journalistic career with the BBC, reporting from some of the world’s most terrifying war zones.

A piece of cake after her experience with Labour.

While the top brass and candidates do their best to talk of positivity, Bernie, in typical fashion, says things would be great on the doorsteps “if it wasn’t for the water charges and the Government. It’s a terrible pity for our great young candidates.”

It’s bad enough for Gilmore to have the face of Childers staring down at him from lamp posts all over the city.

Now, he looks down from his podium in the Westbury hotel to find the face of Bernie Malone looking up at him from the back row.

Gritted teeth
But on to the present, where he continues through gritted teeth to support Phil Prendergast, the party’s sitting MEP and troublesome candidate in Ireland South. Her unique selling point is that she thinks Gilmore is a terrible leader and should be replaced.

But as she is officially on the ticket, Phil must be invited to all the family events. She’s like the bolshie aunt who gleefully turns up to every big do, eats and drinks all round her and then proceeds to insult the relatives. She was at it again at the launch.

The manifestos are coming a bit late in the day. The poll is a week from now. But another launch gives respite from grief at the doorsteps.

So Eamon smiles while Phil gets into all the family photos and nobody says a word about her disloyalty to the leader. Mortifyingly hilarious to watch. Phil, on the other hand, seemed to be enjoying herself greatly.

As much as Childers seemed to be enjoying herself while handing out leaflets outside SuperValu in Churchtown. She may not be trading on her father’s name, but she is certainly benefiting from it.

Almost every person she speaks to mentions her father, Erskine Childers, the fourth president of Ireland.

An elderly man listens politely to her sales patter. Nessa can talk. Vaccinated with a gramophone needle, as the older folk who remember her father might say.

The candidate says that while she used to be in Labour, she is not part of any party machine now and never wants to be part of one again.

This, she stresses, does not apply to joining a grouping in the European Parliament where there is clout in numbers.

“I don’t blame you for leaving them,” says the man, when suddenly, it dawns on him.

“Are you anything to Erskine?”

“Oh, congratulations,” says he. “Well, you’ll be getting my vote now.”

There is a slightly distracted air to Nessa’s determination. You get the impression she could say anything.

“I often think I should have edible leaflets,” she remarks to one woman. “So something useful could be done with them.”

Catherine Doyle from Rathfarnham has given a lot of thought to the European elections and feels the media ignores what goes on in Brussels.

“We need strong representation there,” she says. “I would normally vote a certain way [for a party] in local and general elections, but Europe is different. Independents can join a particular group, so they are not left out on the edge like they are here.”

Nessa pushes independence and lack of a big support team. “There’s only one car with my face on it. I call it the Wanderly Wagon, which is what they called the presidential bus in 1973.”

A woman comes over to shake her hand. “Can I wish you well. I’m from Cork, so I can’t vote for you.”

Childers tells her to vote for Diarmuid O’Flynn of the Ballyhea protest group. “He is fighting like me to undo the unfair debt burden imposed on us by Europe.”

“I knew your father and your grandfather. You’ll have my vote.” He says his name is Brendan. “I’ll vote for her because she’s independent, has principles and stood up for them.”

He won’t be supporting Labour this time. “I definitely won’t be voting for them for obvious reasons. They’re a bunch of hypocrites.”

Breege Kavanagh and Bridget Toolan are in a quandary, not sure how to vote. Breege changed the habit of a lifetime and voted Fine Gael in the general election, but says she is drifting back to Fianna Fáil. Bridget thinks the Government is trying its best, but people are suffering. “It’s anybody but Fine Gael for me now.”

Name recognition apart, if the reception accorded to Childers is anything to go by, these elections will be a happy hunting ground for Independent candidates.

Which brings us back to Gilmore. He warns about the rise of the Independents, paddling their own political canoes.

If they take control of councils, many “will have real problems in agreeing anything at all. And in many cases, they will fail to agree a budget. Given half a chance, these people would make our cities and counties unworkable.”

He takes questions surrounded by the candidates, all smiling for dear life. There is a question for Phil. Has she changed her opinion of Gilmore. He’s standing a couple of feet away from her.

“I stand by what I’ve said,” she declares.

The superglued stony smiles of the candidates around the Tánaiste were slightly unnerving.

Bloomberg ranks New Zealand top in fight against Covid-19 - but how did Ireland fare?