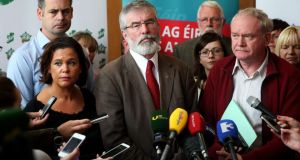 Sinn Féin leader Gerry Adams has claimed the Northern crisis is being driven by the desire of unionists to hold on to power at all costs.

“It is all about power. They want to hold on to whatever power they have but it is power on their terms. It is not acceptable, those days are gone,” Mr Adams said at the margins of his party’s conference in Co Meath yesterday, where he addressed TDs, Senators, MEPs and MLAs.

Mr Adams said Sinn Féin was ready and willing to deal with the issues at the heart of this crisis, which could see the collapse of the powersharing institutions.

“The broad unionist family is happy to be in the institutions, but wants to be there on its own terms. That is not possible,” the Louth TD said.

“All of these stops and starts have been about them trying to dilute and delay. There is also resistance within the Irish establishment because of the growth of Sinn Féin.

Mr Adams said he did not know how the crisis had come to the point where an early election and collapse of the institutions was a possibility.

“Peter Robinson during the plenary session of the talks last week, said – and he said this publicly, I think – that he did not for a moment think Martin McGuinness and Gerry Adams were in any way involved in the killing of Kevin McGuigan.

“He knows that, they all know that. This is a very contrived exploitation of a very tragic event in the life of a family.”

Mr Adams claimed the only people benefitting from this were the people who murdered Mr McGuigan and Gerard “Jock” Davison.

He said: “Will there be conflict? No, there won’t be. Is there the capacity by some to carry out violent acts? Of course there is and they should not be rewarded.

“The imperative is to make politics work. Individuals who went out and shot Jock Davison and those who shot Kevin McGuigan are being rewarded with the collapse of these institutions and a very serious political crisis.

The Louth TD also attacked Fianna Fáil leader Micheál Martin for his “very stupid” and “irresponsible” call for the Assembly to be suspended.

“It is illegal – the British government don’t have the power to do that,” Mr Adams said. “They would have to step outside of all of the agreements and bring in emergency legislation.

“It, in fairness, even runs against the [Irish] Government’s position, which is that there should not be a suspension,” the Sinn Féin president said.

“It is him [Mr Martin] putting the Good Friday Agreement, and the progress that has been made, in the rubbish bin. It was irresponsible and very stupid that he would have the same position as rejectionist unionism.”

He told The Irish Times the party was ready for an election, North and South. Mr Adams said the general election in the Republic should be held without delay and insisted Sinn Féin would contest each of the 40 constituencies.

“We will fight every seat to win. It is in the gift of the people. We want the biggest mandate possible and we are offering people a choice,” he said.

“It is against croynism. It is the same old story politics that Fine Gael and Fianna Fáil have been shovelling up for decades, or it is genuine republicanism and the possibility of a new direction.”