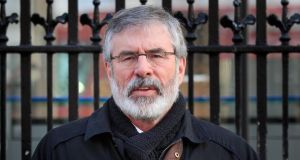 Sinn Féin president Gerry Adams has been criticised for comments in which he referred to unionists as ‘bastards’. Photograph: Gareth Chaney/Collins.

Sinn Féin president Gerry Adams has been criticised for comments in which he referred to unionists as “bastards”.

Amid tensions in the North between Sinn Féin and the DUP over issues such as the use of the Irish language, Mr Adams told a meeting of party supporters in Enniskillen, Co Fermanagh on Monday night that he believed “bigotry” existed in some sections of unionism and that “the point is to break these bastards”.

In a recording of the remarks, published by The Impartial Reporter, Louth TD Mr Adams says that nationalists often asked him when he was in Belfast what the point of Sinn Féin sharing power with the DUP in Stormont actually was.

His comments came just days after East Derry DUP MP Gregory Campbell, who recently lampooned the Irish language in the Northern Assembly with his “curry my yogurt, a can coca coalyer” comment, told Sinn Féin it would never get an Irish language act in Northern Ireland.

Sinn Féin had criticised that incident, with culture minister Carál Ní Chuilín saying she had complained to the Stormont speaker’s office about his “mockery of the Irish language” and stating that “I feel he’s a racist...”.

Mr Campbell told the DUP annual conference at the weekend that Sinn Féin would love nothing more than to lull unionists into agreeing to “costly projects” such as a bill of rights, and “their long demanded Irish language Act”.

“Respect is a two-way street,” Ms Foster, a Fermanagh and South Tyrone MLA, said. “The hyperbole from republicans over recent days has been exposed as hypocrisy. Republicans use the Irish language as a weapon and tonight Gerry Adams confirms that they view equality as another weapon to attack unionists, or ‘these bastards’ as he would term us.”

“I have just listened to the audio recording posted on social media by the Impartial Reporter of Gerry Adams’ remarks. They are stunning in their arrogance and hatred,” he said, adding that “the most shocking revelation is that he considers equality as a ‘Trojan Horse’”.

“The audio recording makes clear Gerry Adams thinks equality is nothing more than a tool to be used to manipulate people like me. That is shocking, to the point of nausea.”