George Mitchell on the art of skilful negotiation 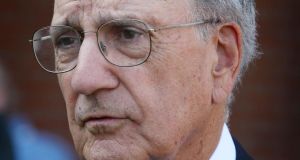 George Mitchell: Spent a month going around each of the 10 parties, and the British and Irish governments, seeking agreement on his timetable. Photograph: The Irish Times

Senator George Mitchell said he almost lost his temper once during the difficult negotiations that led to the 1998 Belfast Agreement, which put Northern Ireland on the road to peace.

As US Senate majority leader from 1989 to 1995, which he described as “the toughest job in the western world”, he learned to control his temper, because when he did lose it, he realised he lost control of the situation too. By the time he arrived in the North in 1995, he had matured to control himself, he said.

Just before Christmas 1997, after 18 months of protracted talks that had gone nowhere, the Northern Irish political parties couldn’t even agree on a two-page document setting out what their problems were.

In the hope of making progress, he moved the talks to a room for a smaller group, where there were no microphones and note-taking was not allowed. But all to no avail – instead there were bitter recriminations, he said.

“I came very, very close to basically telling them where to go. I bit my lip. I didn’t say anything and broke for Christmas,” Senator Mitchell told a captivated audience in Washington on Wednesday night, hosted by the Irish Network DC, an Irish-American networking group.

The tit-for-tat killings following the murder of Loyalist leader Billy Wright in December 1997 left the talks in disarray by February.

On a flight from Dublin to New York in mid-February, Mitchell drafted a note proposing a two- week timetable with daily targets, culminating in an agreement.

He spent a month going around each of the 10 parties, and the British and Irish governments, seeking agreement on his timetable. They all ultimately consented, creating a much-needed breakthrough.

“Any one of the parties could have prevented the establishment of an unbreakable deadline, any one of them, and the fact that they were willing, albeit some of them very reluctantly, to accept the deadline meant in my mind they are open to an agreement.”

The 81-year-old recalls those hard-argued negotiations and other fascinating moments from his remarkable zig-zagging career in a new memoir, The Negotiator: Reflections on an American Life.

There are plenty of lighter moments too, including the time after he took his seat in the Senate, representing Maine. He discovered that during hours-long filibuster speeches, senators retired to a darkened anteroom where they slept close together like babies on folding cots.

Mitchell recalls climbing over a snoozing Ted Kennedy into a cot and looking into the “sleeping face” of Virginia’s John Warner, who could have been at home in bed with his wife, actress Elizabeth Taylor.

Mitchell’s book offers insights on the art of negotiation. And it is an art, he writes, not a science, “requiring knowledge, skill, judgment and humility. Especially humility”.

Agreeing at the outset in Northern Ireland to listen to all the parties, no matter how long it would take, led to hundreds and hundreds of hours of repetitive speeches, but it ultimately proved very effective.

“I said to them once, ‘in terms of finding things to disagree about, you are geniuses, great innovators’,” he said. “’In finding ways to resolve your differences you are like blocks of granite.’ ”

Never having been to Northern Ireland before 1995, for the first six months he “couldn’t understand a word anybody said”, he joked.

Asked about the row over welfare reforms currently dividing the parties and this week’s murder of former IRA leader Gerard “Jock” Davison, Mitchell said the 1998 agreement did not guarantee peace, stability or reconciliation but made it possible.

There is no guarantee the agreement will hold, he says, but he believes some of the self-criticism is unjustified. He notes the dysfunction in US politics and violence in American society by way of example.

“Will you point out to me what society in the world, particularly democracies, functions without dispute, without disagreement and without some degree of violence? Don’t pull Northern Ireland to a standard that no other society has ever or will ever meet.”

However tricky the problems might be for Northern Ireland in future, Mitchell urges the people to “concentrate on the positives.”

The North’s people “have proven time after time that they have the capacity of being productive and really prosperous”, he said, while cautioning that it will be some time before all problems are resolved.

“Keep this in mind: the solution to every human problem contains within itself the seeds of a new problem.”

The Negotiator is published on May 21st