Garda to get power to intercept texts, emails and social media 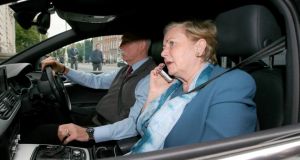 Tánaiste and Minister for Justice and Equality Frances Fitzgerald arriving at Tuesday’s Cabinet meeting. The new legislation, which is expected to be published in the autumn, will cover WhatsApp, Viber and Facebook as well as emails. Photograph: RollingNews.ie

The Garda will be given power to intercept text messages, emails and social media accounts of criminal suspects under legislation approved by the Cabinet.

The legislation introduced by Tánaiste Frances Fitzgerald will bring Irish law into line with other EU countries and enable the Garda to co-operate with other police forces in tacking serious crime.

The legislation, which is expected to be published in the autumn, will cover WhatsApp, Viber and Facebook as well as emails.

The law does not currently provide a clear basis for internet-based forms of communication despite gardaí raising concerns that instant messaging apps are being used by criminals.

A spokesman for the Minister said the need to enhance Garda powers in this area was absolutely essential given the importance of strong action to tackle the organised crime gangs whose activities, here and abroad, have given rise to the murders seen over recent months in the Dublin region.

He added that the new powers are also critical in supporting actions to counteract the persistent threat from paramilitary groups on this island and the evolving threat from international terrorism.

It is proposed to make changes in the law to provide that the power which already exists to intercept post and telephone communications, and which department sources say has played a vital role in fighting crime and counteracting threats to the security of the State, will be extended to other, more modern, forms of communication and all companies providing these services.

The same safeguards will apply as under the present regime.

The department spokesman said the powers at issue are common in other jurisdictions and the threat we face from organised crime and terrorism require us to provide a clear legal basis for such powers here.

Powers of interception are only available in respect of the investigation of serious criminal offences and to safeguard the security of the State.

Only the Minister for Justice and Equality can authorise an interception, on application by the Garda Commissioner or the Chief of Staff of the Defence Forces, and only under the limited conditions set out in law.

The current regime is overseen independently by a serving judge of the High Court who reports to the Taoiseach and a judicial complaints mechanism is available to individuals. No change is proposed to these arrangements.

The Garda authorities have also the power to make use of technology that can enable them to identify unknown communications devices that may be in use by criminals or terrorists.

Authorisation for the use of a surveillance device under the 2009 Act is generally granted by a Judge of the District Court (although there are urgency provisions).

The current regime is also overseen independently by a serving judge of the High Court who reports to the Taoiseach, and a judicial complaints mechanism is available to individuals.

No change is proposed to these arrangements.

Following the Government’s decision, the necessary proposals will be brought forward by the department in close consultation with the Attorney General and other interested parties.