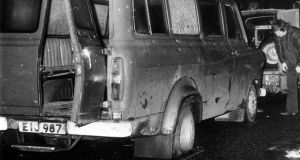 File photo dated January 5th, 1976 of the bullet riddled minibus where 10 Protestant textile workers were shot shot dead in an IRA attack near the Co Armagh village of Kingsmill in 1976. Photograph: PA

The Garda has been accused of “effectively ignoring” requests to co-operate with a new inquest into the murders of 10 Protestant workmen gunned down in a notorious IRA massacre.

A lawyer for the family of one of the victims of the Kingsmill attack heavily criticised what he described as a lack of engagement from gardaí with the fresh investigation into the 1976 murders.

The 10 textile workers were shot dead by the side of a road near the Co Armagh village after a gang of masked gunmen flagged down the minibus they were travelling home from work in.

It is believed the murderers launched their attack from Co Louth.

Neil Rafferty, representing the family of Kenneth Worton, said he was “quite simply shocked” after a preliminary inquest hearing was told that no substantive response, other than acknowledgement letters, had been received from the Garda six months on from when the organisation was first asked by the Coroners Service for Northern Ireland to engage with the inquest.

“It must be understood by all concerned, including the commissioner for An Garda Síochána (Nóirín O’Sullivan), this was a mass murder planned, conceived and launched from Co Louth and it was recovered to Co Louth,” he said.

The hearing in Belfast, which was attended by a number of victims’ relatives, was also informed that the Police Service of Northern Ireland (PSNI) has agreed to check official documents to establish whether any suspects in the Kingsmill attack ever received letters of assurance from the British government — so-called “on-the-run letters” — informing them they were not being actively sought by the UK authorities.

The new inquest into the sectarian shootings was ordered by Northern Ireland’s Attorney General, John Larkin, last year after a long campaign by bereaved relatives.

Before opening fire, the IRA killers asked all the occupants of the vehicle what religion they were. The only Catholic worker was ordered away from the scene and the 11 remaining workmates were then gunned down. Only one survived, despite being shot 18 times. No one has ever been convicted of the murders.

Mr Rafferty noted that the van used in the attack was stolen in Co Louth and then abandoned there afterwards. “It would be inconceivable that you would get anywhere close to a meaningful inquiry into these matters without the active engagement of the Garda,” he said.

Earlier counsel for the coroner Ronan Daly had informed the court that the only responses from the Garda had been in the form of acknowledging receipt of letters from Mr Leckey’s office.

“There has been ongoing correspondence seeking their active engagement with this process but to date nothing substantive apart from holding replies have been received,” he said.

Mr Rafferty highlighted that the first contact was made in April this year.

“Here we are in October with further correspondence having been sent and effectively ignored,” he said.

Dr Tony McGleenan, representing the PSNI, said he would try to progress the issue by contacting Garda liaison staff that had worked effectively with the police north of the border during the Smithwick Tribunal — a recent judicial inquiry in the Irish Republic into the murders of two senior Royal Ulster Constabulary (RUC) officers close to the border during the Troubles.

Mr Rafferty, who acknowledged there had been effective co-operation for the Smithwick probe, suggested that step was not enough.

Mr Leckey said the matter was one best addressed at an inter-governmental level.

“It would be better for me to stand back from this and allow it to be dealt with on a government to government basis,” he said.

Mr Rafferty agreed with that approach.

“It’s not something you should be engaged in sir,” he told the coroner.

“It’s the Department of Justice (at Stormont), it’s government level this should be pursued at.”

Dr McGleenan suggested that the court wait to see what the contact with Garda liaison staff produced before taking the matter further — a proposal that all parties agreed to.