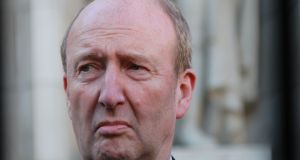 Minister for Transport Shane Ross will not have the option of staying out of questions about the future of Irish Rail. File photograph: Nick Bradshaw/The Irish Times

Minister for Transport Shane Ross last week told his local newspaper, the Dundrum Gazette, that his refusal to become involved in the recent Dublin Bus dispute was the right course of action to safeguard the taxpayers’ interests.

Ross was criticised heavily for not intervening in the dispute, which left commuters stranded for several days. At the time, he said he was not prepared to “sign a cheque” to solve the dispute. That, he says, forced management to realise that they were “on their own.” Staying out, he says, “worked”.

The Minister will not have the option of staying out of the questions about the future of Irish Rail. The contents of the report published in The Irish Times today demonstrate that the company is in a massive crisis, facing potential insolvency and needing a huge State bailout over the coming years if it is to maintain anything like its current level of service. The network needs in excess of €600 million over the coming years or large chunks of the railway map of Ireland will disappear.

In the short-term, there are immediate funding requirements to address safety needs. New trains are needed to meet existing demand. And even if funding is found to meet these needs, some lines may have to close as they have little chance of being economic. These decisions will come to rest on the Minister’s desk. He will now have to make far-reaching decisions about the future of rail transport in Ireland.

That would be a daunting enough prospect if the decisions were simply technocratic calculations. But any process to close lines would be a political minefield. The potential closure of rail lines will immediately become a political issue. Just look at the sort of local feeling that is stirred up by the threatened closure of post offices, small schools or Garda stations.

Ross knows all about this. A petition to reopen Stepaside Garda station is on the front page of his website. He campaigned specifically on the issue at the last election, so much so that a commitment to reopen the station is widely suspected to be one of the unwritten parts of the programme for government.

Elsewhere within the Independent Alliance, rail services are already a matter of heightened political concern.

Independent Junior Minister Seán Canney secured a commitment in the programme for government to study an expansion of the Western Rail Corridor. The programme says “No measures will be taken to prevent the future reactivation of this corridor for rail use.” Canney supports campaigners in the West who want the line extended from Athenry to Claremorris. The report envisages that parts of the existing line could be shut.

In a statement last week Canney said the rail review now on the Minister’s desk “should focus on rail expansion . . . The Western Rail Corridor has the potential to develop rail freight, commuter rail and tourist trains”.

The contrast between this bold optimism and the pessimistic reality of the report currently on Shane Ross’s desk could hardly be greater.

Ross could perhaps wheedle some extra exchequer funding for Irish Rail. But securing enough to ward off line closures seems unlikely. And even if he could, would he want to transfer more and more public money into a loss-making company?

Whatever way he turns, there will be unpleasant political consequences.