Campaigning for No: 'I am upholding the Proclamation' 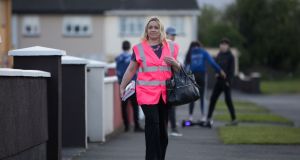 “I was bound by my conscience. The party was led by its policy.”

With two terse sentences, the Offaly TD Carol Nolan describes the gulf that has grown between her and the Sinn Féin leadership over the referendum to repeal the Eighth Amendment.

Nolan and the Meath West TD Peadar Tóibín have found themselves at odds with their parliamentary party colleagues on this issue.

While divisions have emerged in all parties, the difference with Sinn Féin is it does not countenance votes of conscience. Nolan has been suspended from the party for defying the whip on the vote for the referendum.

Nolan, a former teacher, is a new TD. Elected in 2016, she was seen as one of the party’s quieter TDs.

But on this issue she has been outspoken. She has been openly canvassing for a No vote at every available opportunity. That translates as a few nights each week, and also for the whole of the weekends. She has also addressed No rallies in Galway, Tipperary and Laois.

On a blue-skied Friday night, she is one of eight people on a Love Both canvass in Ardan View, a 1970s estate across the road from the General Hospital in Tullamore.

The canvass is led by former Fianna Fáil councillor Paddy Rowland who says it is great to have Nolan along. “She is instantly recognisable. People respect her because of her views and integrity.”

It is no surprise that there is a big majority of Nos here. Yeses are few and far between. Some of the younger residents – men in particular – have yet to make up their minds, though.

Nolan is canvassing with schoolteacher Claire Delaney, who has already canvassed here in February. Andy Lowbridge, a father of three young children, comes to the door and says he has yet to make up his mind, that it’s 50:50 with him. “We are getting a lot of literature. I understand the circumstances,” he says.

In a long discussion, Nolan and Delaney set out the classic No arguments, the assertion that the change will usher in abortion on demand, and the trust factor with politicians.

That resonates with Lowbridge. “If a politician told me told today was Friday (which it was) I would not believe them,” he says.

Typical of the majority No sentiment is grandmother Marie Tyrrell. “A No vote will be mine,” she says. “I have seven (children) and am going to talk to them.”

Canvassers Siobhán Flynn and Veena Lasrado Machedo have spent a long time talking to Lynda Kavanagh on her doorstep.

Afterwards Machedo sets out the approach. “If they are undecided, we will explain and tell them the reality so they now all the facts.”

Flynn adds that “12 weeks resonates with a lot of people”.

While there were shoals of No supporters, one wonders from listening to the uncertainty of a minority of householders if there is a silent Yes vote, just as No campaigners claim there is a silent No vote in Dublin.

Asked if she feels herself isolated in Sinn Féin, Nolan says: “At the minute I am focused on the referendum. I am acting on my conscience and my beliefs. My beliefs are very strongly pro-life.

“I do hope there is space given to republicans like myself who would be also strongly pro-life.”

Nolan says she has been contacted by many members who support her view and she is glad at what she is doing. “The Proclamation says we must cherish all the children equally and I feel that is what I am doing, as a republican, as an Irish woman and as a mother.”

Asked if the party is not minded to give members like her a free vote in the future, she deflects a little.

“I have not come to that point yet. I have been so busy supporting the No campaign.

“I am just working in the here and now. I would be hopeful that there will be a vote of conscience. I think there is a need for a free vote. As republicans we need that space.”