Foyle: Eamonn McCann beats odds as he is elected for PBP

McGuinness, Eastwood and Durkan all elected after seventh count 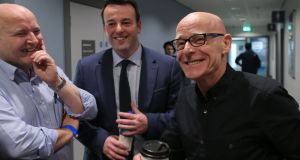 Four weeks before this week’s Northern Ireland Assembly election Eamon McCann was an eleven to one outsider with the bookies to win one of the six seats in his native Derry.

After all he contested his first election in February 1969 and he’d never won.

Going into this week’s election the political wisdom was that the seventy-three years old Trotskyite would be the meat in the sandwich between the SDLP who were defending their three seats and Sinn Féin, who brought in Martin McGuinness from Mid-Ulster in a bid to wrest one of those three seats from the SDLP.

The best laid plans of both those parties were scuppered by McCann.

Before the close of poll on Thursday night McCann’s odds had crashed from eleven to one against to eleven to four on. One of those who backed McCann to cause an upset was Bernadette McAliskey, formerly Bernadette Devlin. Like McCann she too contested her first election forty nine years ago. She was in the count centre to support McCann but she wouldn’t say how much money she had on McCann, but she looked like the cat who got the cream.

One of McCann’s first decisions when he enters the Northern Ireland assembly is what is he going to wear.

Both the SDLP and Sinn Féin took their eyes off the ball. They under estimated the wave of support for McCann and they paid the political price. The SDLP, although still the largest political party in Derry, lost one of its three seats. Sinn Féin, oozing with pre-election confidence that with big hitter Martin McGuinness on the ticket they would steamroll over the SDLP, could hardly hide their strategic failure.

Both tried to put their spin on things to explain what went wrong for them, but the best yarn from this election in Derry was spun by McCann.

“I contested my first election in February 1969. Before this election I went into the attic in the house and found one of my original election posters. I campaigned then for a proper university for Derry, for improved railway travel, for an improved roads infra-structure and for more jobs. They were the exact same issues that I campaigned on almost fifty years later.

“The People Before Profit party was also the only party not to campaign on green and orange issues. We did so on our manifesto and we did so on the doorsteps and it clearly resonated with the people. This was a victory for the marginalised by the marginalised,” he said.

It was a big night for the PBP in Northern Ireland with triumphant scenes in west Belfast where Gerry Carroll romped to victory. The 28-year-old socialist was hoisted on to the shoulders of cheering supporters while waving a red flag.

He received 8,299 first preference votes – almost double any of his nearest rivals. Dressed in jeans, a hooded top and brightly coloured trainers, he vowed to be a “thorn in the side of the main parties” at Stormont.

Mr McGuinness said while he was disappointed that his party had failed in its strategy to pick up a third seat in the Foyle constituency, he said he believed the big losers in Derry were the SDLP. “Let’s remember we came into this election here with two seats and we have retained two seats. The SDLP came into the election with three seats and they have now just two. Yes I’m disappointed that we didn’t pick up that seat but I don’t use the word failure.

“I knew going into this election that People Before Profit would do well here and we have witnessed what I believe will be the successful emergence of an independent candidate. But overall across the North I am happy with my party’s performance. We went into this election with 29 Assembly members and we will come out of it with the same number.

“The electorate have said that they have confidence in both Sinn Féin and the DUP to take up the positions of political leadership after the outcome of this election.”

SDLP leader Mr Eastwood said the “phenomenon of the Independents”, which saw Independent candidate Anne McCloskey garner 3,410 first preference votes, was an issue that all the mainstream candidates had to listen to and learn from. “The people are angry and they are expressing their anger in the way they have voted,” he said.