‘In politics you take a risk and have to deal with the consequences,’ Renua leader says 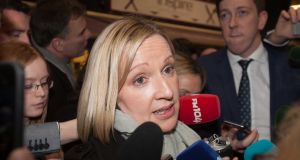 Former Renua TD Lucinda Creighton at the RDS count centre. She has been reflecting on the toll politics can take on family and finances after clearing out her Dáil office. Photograph: Gareth Chaney/ Collins.

Lucinda Creighton reflected on the toll politics can take on family and finances as she cleared out her Dáil office after failing to retain her seat in Dublin Bay South.

Her husband, Senator Paul Bradford, who was unable to regain the Cork East Dáil seat he lost in 2002 and will not be returning to the Oireachtas either, was with her in Leinster House on Monday.

The couple contested the general election for Renua, the new party founded by Creighton last year, along with 24 other unsuccessful candidates.

“The first thing that crossed my mind on Saturday was how am I going to pay the rent next month? We have made a huge financial sacrifice to set up the party,” she said.

“We’ve ploughed our own money into it, both in our own personal campaigns but also into the bigger picture of the party nationally. As have all of our candidates . . . because there was no State funding.

“That’s just the way it is. It’s a cost, obviously, and it has put us in difficult financial circumstances, but we’ll get over it.”

Getting a new job is a priority for Creighton, but she insists she will not rush into anything. Bradford has not made any decisions yet about his future either, she said.

A couple of unsolicited offers in the EU policy field have already come her way, she said. “That’s kind of my area of expertise and I am fortunate that I’m an ex-minister, so that counts for something.”

The former minister of state for European affairs forfeited both her ministerial office and parliamentary party membership when she defied Fine Gael on abortion legislation in July 2013.

“Definitely. I think for parents, male and female, it’s hard. We’ve a little girl who’ll be two on March 26th, and she is literally the light of my life.”

Creighton said her daughter Gwendolyn “really misses us” when she and Bradford are working long hours.

“It’s normal, I think, for parents to go out to work, but not being there at night is a really difficult thing, having to leave very early in the morning and not put her to bed.

Creighton returned to work three weeks after Gwendolyn was born. “As soon as I could walk, literally I was back in Leinster House.”

Even then, she felt as if she was neglecting her constituency duties. “As a TD you never feel you’re on top of things. You never feel that you’re getting back to constituents quickly enough or that your game is at peak level.

“And then try having a family on top of that. And try setting up a new party with no funding. It’s just been crazy. The last two years of my life have been . . . I wouldn’t recommend it to anybody, to be honest.”

She said she was disappointed Renua “didn’t get traction” and “devastated” that deputy leader Billy Timmins and Terence Flanagan also failed to keep their seats.

However, she insisted this was “not the end of the road” for Renua, saying the party would run candidates in the next local elections.

Creighton said she will continue to be involved, but does not know if she would like to attempt to become a TD again.

Creighton said “certain media forces” targeted her and her seat during the campaign. “But am I bitter? Absolutely not. Life goes on. I’ve an amazing little girl. I’ve a great husband,” she said.

“That’s a huge sacrifice. It’s a sacrifice I was happy to make. But it’s also a sacrifice that I’m now happy I don’t have to make any longer. I’m very philosophical about it.

“In politics you take a risk and you just have to deal with the consequences.”