Former Galway TD Bobby Molloy dies at the age of 80

Bobby Molloy with his wife Phyllis at NUI Galway watches votes being counted for Galway West in the 2016 general election. He joined the celebrations as his former Progressive Democrats colleague Noel Grealish was re-elected. Video: Joe O'Shaughnessy 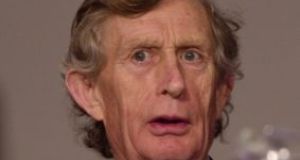 Bobby Molloy, who has died age 80, was a long serving cabinet Minister and a founder of the Progressive Democrats who was a TD for almost four decades.

Bobby Molloy, who has died age 80, was a long serving cabinet Minister and a founder of the Progressive Democrats who was a TD for almost four decades.

A TD for Galway West from 1965 until 2002, Mr Molloy was an important political figure and was involved in many of the biggest political events during the period.

His decision to leave Fianna Fáil and join the fledgling Progressive Democrats in 1986 sent shock waves though the political system and helped to propel the new party to its election breakthrough in 1987.

Mr Molloy was born in Galway in July 1936 and educated at Coláiste Iognáid and University College Galway.

He was elected to the Dáil for Fianna Fáil in 1965 as part of a wave of younger TDs who were to play a significant role in the party in the decades that followed.

Mr Molloy was an admirer of George Colley and strongly supported his campaign for the leadership against Charles Haughey in 1966. Mr Molloy was to remain deeply suspicious of Mr Haughey for as long as both of them served in the Dáil.

In the 1966 leadership contest Jack Lynch emerged as the compromise candidate and ultimately defeated Mr Colley for the leadership.

Mr Molloy was appointed a junior minister after the 1969 general election and was promoted to minister for local government after the arms crisis which saw Mr Haughey and Neil Blaney sacked and Kevin Boland resigning from his post in local government in protest.

Fianna Fáil lost power in 1973 but when the party was returned to office in 1977 he was appointed minister for defence.

He was again a strong supporter of Mr Colley in the leadership contest of 1979 but Mr Haughey emerged as the narrow winner.

Mr Molloy was dropped from the cabinet and became one of the strongest opponents of the Haughey leadership in the party during the three heaves of 1981 and 1982. 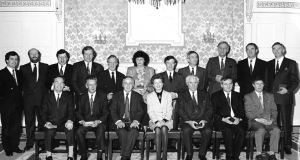 In early 1986, following the foundation of the Progressive Democrats by Des O’Malley and Mary Harney in December 1985, Mr Molloy created a sensation by joining the new party.

He was comfortably re-elected as a TD for the party in 1987 and retained his seat in 1989 when the PDs were dramatically reduced in size.

Mr Molloy was one of the key negotiators of the deal that brought the PDs into government with Fianna Fáil in 1989 and he was appointed to the cabinet as minister for energy.

He was again involved in the negotiations that led the PDs into the second coalition with Fianna Fáil after the 1997 general election.

He was not appointed to the cabinet at this stage but was a junior minister at the Department of the Environment.

He resigned from that position shortly before the 2002 general election following a controversy that erupted when it was disclosed that he had written a letter to a judge on behalf of a constituent who had been convicted of rape.

He retired from politics in 2002 but campaigned strongly for Noel Grealish, the PD candidate in West Galway, who was elected to the Dáil and has retained his seat ever since.

He is survived by his wife Phyllis, daughters Sorcha and Sinead, and sons Donnacha and Dara.

President Michael D. Higgins, who was a Labour TD in Galway West, said Mr Molloy made a huge contribution to Irish public life.

“Throughout his career, he gave excellent service over several decades and his name is recalled with great affection throughout the constituency,” he said.

“His life in politics began before mine, and on every platform he served, he delivered his contribution, which was always well informed, with great distinction.

“He earned the respect of both his supporters and opponents because of the integrity with which he held his views.”

“Bobby gave a long and dedicated service in many Ministries and he was always a tireless campaigner for his native Galway.

“I got to know Bobby well during his time in the Dáil and I extend my deepest sympathy to his wife Phyllis and to their family,” he said .

Fianna Fáil leader Micheál Martin said he was very saddened to learn of the death of Mr Molloy.

“Bobby had an outstanding and distinguished political career and proudly served the people of Galway West for many years as both a TD and minister,” he said.

“Bobby was a man of great personal warmth, integrity and purpose. Having worked with him during 1997 Cabinet, I had the opportunity to witness first hand his singular focus on the issue of homelessness.

“He brought a distinct focus and energy to the issue, and the interdepartmental approach that he adopted to tackle homelessness was a particularly successful strategy in its time. ”

Housing the dominant issue in seven-way general election debate 00:21
Plans to evacuate Irish citizens from China virus epicentre under way 00:43
Election 2020: Party leaders clash on multiple issues in TV debate 00:10
Election 2020: Sinn Féin wants new 5% tax on people earning over €140,000 00:05
‘There’s so much change that people want and that they didn’t get’ – Zappone 23:45
SUBSCRIBER ONLY