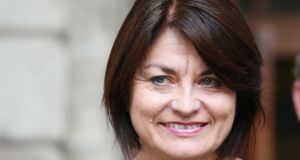 Fidelma Healy-Eames: to stand as an Independent in Galway West as her constituents were overwhelmingly in favour of her standing as a non-party candidate. Photograph Collins/Courts

A former Fine Gael senator linked with Lucinda Creighton’s new party has decided to contest the next general election as an Independent. Fidelma Healy-Eames, who will stand in Galway West, said her constituents were overwhelmingly in favour of her standing as a non-party candidate.

While Ms Healy-Eames said she has never been involved with Ms Creighton’s Reboot Ireland party, she said there was a “lack of information” about it. She considered joining the party but said her supporters felt there was “no meat on the bones”.

She was aligned with Ms Creighton’s previous Reform Alliance grouping, a loose collection of TDs and senators in the Oireachtas comprised mostly of those who lost the Fine Gael whip over abortion legislation. “I was never linked with Reboot Ireland, but I was a member of the Reform Alliance,” Ms Healy-Eames said. Ms Creighton also said Ms Healy-Eames was not involved with Reboot Ireland, but wished her former Fine Gael colleague well.

One of the problems with Ms Creighton’s new party, she said, was “the fact that there was no policies published, there was no meat on the bones”.

Apartment owner who paid €16,000 for defects will not ‘fix it quietly and go away’ 11:30
Fatal stabbing of young pony in Co Longford ‘a new low’ 11:28
Fianna Fáil promises €10m redress fund for Celtic Tiger building defects 10:59
Feud making life ‘unbearable’ for some in Drogheda, mayor says 10:58
Snow on the way as Ireland’s weather set to turn colder 10:48
SUBSCRIBER ONLY