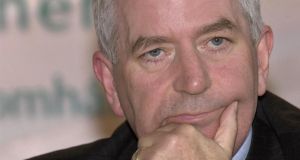 Former minister for finance Charlie McCreevy: increased the exemption to 10 years before papers could be accessed . Photograph Brenda Fitzsimons

Cabinet papers from as recently as five years ago are to become accessible under Freedom of Information for the first time, meaning some of the Brian Cowen-led government’s confidential papers can be released.

Minister for Public Expenditure and Reform Brendan Howlin obtained approval at yesterday’s lengthy Cabinet meeting for the text of a new FoI Bill and he is expected to announce details of the changes today.

The upfront application fee of €15 per request will be retained but the charge for an appeal will be reduced from €150 to €50 and the cost of initiating an internal review process will go down from €75 to €30.

The Fine Gael/Labour programme for government claimed the previous Fianna Fáil-led administration had “undermined” the FoI legislation and committed the Coalition to restoring the law to its pre-2003 status. “In relation to government records which were a particular focus of the 2003 Act, they will no longer have a mandatory exemption. The 10-year release rule is going to be lowered to five years,” Labour’s Government spokesman said yesterday.

If the Bill becomes law in the autumn, papers from 2008 would be accessible.

Communications between members of Government will no longer be protected and the scope of records covered by the exemption will be narrowed. A number of statutory bodies will come under the remit of the legislation for the first time.

‘Security exceptions’
The programme for government said FoI should be extended to include “the administrative side of the Garda Síochána, subject to security exceptions”, along with “all bodies significantly funded from the public purse”.

When the original FoI legislation was introduced in 1997, Cabinet records were protected for five years. But in 2003, then minister for finance Charlie McCreevy increased the exemption to 10 years before papers could be accessed.

Mr McCreevy also ensured that communications between ministers on matters of government business were protected.

At that time, Mr McCreevy said: “I do not believe that it’s in the public interest that documents about government decisions on important issues are released before a sufficient period of time has elapsed.”

He said the government had to look at different alternatives and approaches when taking decisions on important economic and social issues.