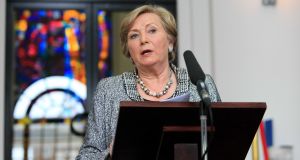 Tánaiste and Minister for Justice Frances Fitzgerald: said it was going down a dangerous path to suggest legal instructions be put in the public domain. Photograph: Gareth Chaney Collins

The Tánaiste and Minister for Justice indicated she would welcome a further statement from Garda Commissioner Nóirín O’Sullivan on the latest controversy surrounding what transpired in private at the O’Higgins commission of investigation.

Frances Fitzgerald was replying in the Dáil yesterday to Fianna Fáil leader Micheál Martin who pointed out transcripts of part of the hearings of the commission were now in the public domain and could not be ignored.

“The bottom line is the transcripts are there now for all to see, Tánaiste, and we can’t live in some sort of make-believe world that they are not there because they are not officially there. This needs to be comprehensively and transparently addressed,” he said.

Mr Justice Kevin O’Higgins investigated allegations of inaction and corruption made against some gardaí in the Cavan-Monaghan division, and leaked transcripts indicated that at first the Garda Commissioner’s legal representative indicated it was believed Garda whistleblower Sgt Maurice McCabe was motivated by malice.

Mr Martin in the Dáil said there needed to be clarity on whether the waiving of legal privilege was the issue at stake for the Garda Commissioner in clarifying matters.

“Clearly if the commissioner saw fit to make a further comment, and she was in a legal position to do so, it would be helpful in answering some of the points made by the deputy,” said Ms Fitzgerald. “I have no doubt that within the legal constraints she will say as much as possible when she is questioned in the future on these issues.’’

She said Ms O’Sullivan would release further information on the O’Higgins commission if legally possible.

“Of course, I will have ongoing discussions with the Garda Commissioner and, if it is feasible and legal for the commissioner to put further information into the public arena, I have no doubt she will do that,’’ Ms Fitzgerald added.

The Tánaiste said she met the commissioner on Monday to discuss issues relating to Dublin’s inner city and the recommendations of the O’Higgins commission. The commissioner had made some of the points to her which she made later in a public statement, she added.

Ms O’ Sullivan had accepted the O’Higgins commission report and Sgt McCabe’s bona fides and that he had never suggested malice was a motivation for his whistleblowing.

Ms Fitzgerald was asked by Sinn Féin leader Gerry Adams if she had asked the commissioner what instructions she had given to her legal team at the commission relating to Sgt McCabe.

Labour leader Joan Burton said the commissioner had a duty to report to the Tánaiste, adding that the House wanted to know about matters that were in the public domain. “Is the Tánaiste prepared to give us that information and explain what happened regarding the legal strategy being pursued on behalf of the commissioner that is not subject to privilege?’’

“If we were to ask the instructions Maurice McCabe gave to his senior counsel, or those that various gardaí gave, or that any deputy appearing before a commission gave, should be put in the public arena . . . how would deputies feel if that were the situation ?” she added.