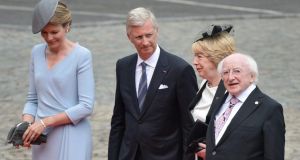 President Michael D Higgins and his wife Sabina (second right) are welcomed by King Philippe of Belgium (2-L) and Queen Mathilde of Belgium (L) as they arrive at the Abbey of St Lawrence to attend the commemoration for the 100th anniversary of the outbreak of the First World War in Liege, Belgium,today. Photograph: Stephanie Lecocq/EPA

The First World War was a horrific event in human history and has to be regarded as such, according to President Michael D Higgins, who is today attending commemorative events in Liege and Mons in Belgium to mark the 100 anniversary of the start of the War.

“I think the significance of the heads of state coming together on the anniversary of World War One is an opportunity to recognise the catastrophe the war was,” the President said in an interview with the Irish Times.

He said the anniversary also provided an opportunity to ask the question how countries could drift into war and how it could expand to the point at which it consumed a generation that had such promise.

“It is worth thinking too of this tragedy that was World War One, not just in terms of all those who died and all those were severely injured and their families, but also the fact that it did not prevent another war within half a century.

“So looking back I think it is important to recognises and respect the dead, the injured and their families; to acknowledge the great generosities towards each other in the trenches. And also then to recognise just the scale of the catastrophe it was.”

Asked how he felt about the loud heckling of his commemorative speech at Glasnevin Cemetery by a small group of protestors last week, President Higgins said that he was a defender of peoples’ right to hold opinions and express them freely in public but he invited them to reflect on what he said during his speech.

“I don’t see how the very best version of republicanism is in the slightest contradicted by the kind of inclusive versions of memory that I hold.

“I go father and I say that there are forms of nationalism and some strains of it that are not necessarily republican. Part of my argument is that a real republicanism has a glowing centre of egalitarianism and how could it be very republican to ignore the deaths, the injuries and the families of the working people of Ireland and Britain who were sucked into a war that was not a war of their making or did not advance their welfare in any significant way.

“So was I upset? No. I understand it. I would ask people to consider what I say and to exercise patience as I try to expand on it during this period.”

President Higgins said that Irish people were in a different place in 2014 than they might have been have been 50 years ago because of the material in the libraries, archives and museums with the letters, the diaries and the recollections of relatives of those who participated in the War.

He said that looking back we could see there was nothing glorious about being forced into trench warfare but it was important to recognise the dead and the survivors with respect and inclusiveness.

“I don’t invest World War One with any heroic tendency in terms of what its purpose was. There isn’t a single serious scholar who suggests that this war was initiated to achieve any great purpose or that it was allowed to continue and escalate for any great purpose.

“I think we should use the opportunity of World War One to recognise the catastrophe that war is as well as how easy it is to become trapped in a bubble of warlike thinking. And to learn from it lessons, and this is consistent with my previous public life, about the importance and the difficulties of building peace.”

The President said that he was struck during preparation for the different events about the way the promise of science and industry that marked the beginning of the 20th century had been put in the service of war.

“Suddenly you have a kind of industrial war because the scale of the killings, 7,000 a day, 30,000 a month, people wading through fields of the dead and the injured. It’s a horrific event in human history and it has to be seen like that. It is exemplary for us to engage with it in all its horror.”

Saying that the commemoration of the War represented a moral moment Mr Higgins said he was under no obligation whatsoever to invest it without any false heroism.

“That is why in this exercise of memory I am engaged in with others there is also a huge obligation on those heads of state and representatives of society to critique their own inherited assumptions of empire and imperial tendency and imperial consequences. And I hope that will happen.”

He said that the War had enfolded Irish people in different ways. Some participated in the belief that it would eventually lead to some form of independence or at least Home rule. Others were fleeing from poverty, others wanted the experience of being in an Army and others simply joined up because their friends were joining.

The President pointed out that some of them like Tom Barry and Emmet Dalton had come back to Ireland and used their Army training in the War of Independence.

“I said in my Glasnevin speech there are a whole series of different motivations that you must try and understand before you rush to judgement on their actions. I do think as well that in many cases my definition of a republic is a republic that includes all of the experiences and all of the vulnerabilities of all of its citizens and these are Irish.”

He said that while there might be a dispute about the exact figure around 150,00 Irishmen joined up and a significant number of them were killed or injured.

President Higgins said that the sensibilities of many Irish people to the soldiers returning from the War may have been blunted because of all of the other events like the execution of the 1916 leaders, the activities of the Black and Tans and the Civil War.

“But now 100 years on from World War One we should be inclusive, and that does not require any amnesia.”

President Higgins said the words of the Turkish leader Kemal Ataturk about respecting the memory of the Allied soldiers who died fighting against his country at Gallipoli were worth recalling.

In a famous letter to the mothers of Australian and New Zealand soldiers who died at Gallipoli Ataturk wrote:

“There is no difference between the Johnnies and the Mehmets to us where they lie side by side now here in this country of ours... you, the mothers, who sent their sons from faraway countries wipe away your tears; your sons are now lying in our bosom and are in peace. After having lost their lives on this land. They have become our sons as well.”