Where a person is caught a second time, gardaí will have discretion to issue a caution 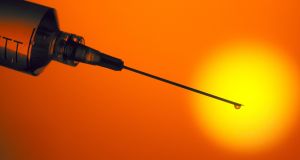 A person in possession of narcotics, determined by An Garda Síochána to be for personal use, will on the first occasion be referred on a mandatory basis to the Health Service Executive for a health screening and a “brief intervention”. Photograph: Cyril Byrne

Mandatory health screenings are to be introduced for people caught in possession of illegal drugs for personal use as part of a series of reforms due to be announced by Government on Friday.

There will be two components to the new health-led approach. A person in possession of narcotics, determined by An Garda Síochána to be for personal use, will on the first occasion be referred on a mandatory basis to the Health Service Executive for a health screening and a “brief intervention”.

Where a person is caught a second time, gardaí will have the discretion to issue an adult caution.

Under the current scheme, a caution is applied to an offender as an alternative to prosecution in the courts and a possible criminal record. The scheme was introduced in 2006, primarily to deal with minor offences committed by first-time offenders.

Minister for Health Simon Harris and Minister for Justice Charlie Flanagan are due to outline the new policy.

Mr Flanagan is also set to examine the possibility of introducing a specific offence of grooming children, through inducements such as the provision of drugs or by other means, to carry out drug-related crimes.

A source in the Department of Health described the new policy as the “biggest shift in our approach to drug use that Ireland has ever seen”.

Mr Flanagan is expected to outline that while the goal is to help vulnerable adults, the “relentless Garda focus on drug dealers will continue apace”.

Mr Harris and Minister of State with responsibility for National Drugs Strategy Catherine Byrne are also set to outline plans to support additional investment in drug-treatment services and to promote an awareness campaign on the treatments available and the harms associated with drug use.

The new plans come after the chair of an expert working group, Garret Sheehan, advised the Government to “strongly resist and reject all calls for decriminalisation of controlled drugs”.

The retired Court of Appeal judge called on the Government to “immediately set about the daunting task of restoring the rule of law to every community”, warning that if an extension of the adult caution scheme is introduced, this “significant policy change” must be closely monitored.