Fianna Fáil had objected to original €600,000 cap labelling it a ‘mansion grant’ 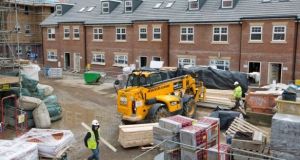 The Government has agreed to lower the cap for the “help-to-buy” scheme for first-time buyers to €500,000.

In last month’s budget, Minister for Housing Simon Coveney and Minister for Finance Michael Noonan proposed an income tax rebate worth up to 5 per cent of the price of a home to a value of €400,000, allowing for a maximum rebate of €20,000.

Under the scheme announced in the budget, buyers of homes up to €600,000 would also be entitled to the rebate, although it would be capped at €20,000. The scheme will only apply to new homes and self-builds.

However Fianna Fáil objected to the €600,000 cap labelling it a “mansion grant”.

The Irish Times has learned the party’s finance spokesman Michael McGrath and Mr Noonan have reached an agreement.

The Government has committed to reducing the cap to €500,000 and Fianna Fáil has insisted it will not table amendments to this section of the Finance Bill, which gives legislative effect to the budget measure.

This is the second change the Government has made to the initiative.

The budget announcement stipulated that applicants to the scheme must take out a mortgage of “at least 80 per cent of the purchase price” of the home.

The Central Bank raised concerns about this because it would encourage buyers to take on more debt than may be necessary.

It is understood the bank pointed out that the average mortgage for first time buyers is now 78.7 per cent of the value of a home and that Mr Noonan’s initial scheme would incentivise people to take on more debt.

The minimum size of the mortgage that must be taken out in order to qualify for the scheme has been changed.