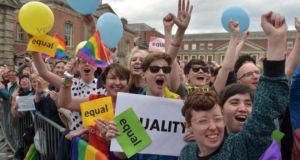 Laws to allow for same sex marriage are to be considered by Cabinet this morning. Photograph: Charles McQuillan/Getty Images

The Cabinet has given its approval to the Bill that will allow for same-sex marriage in the State.

The Government said the legislation should be passed in weeks clearing the way for the first marriages to take place before the end of the year.

Minister for Justice Frances Fitzgerald said TDs would begin debating the Bill, which follows the passing of a referendum on same-sex marriage in May, when the Oireachtas returns from its summer recess next week.

“It will make marriage equality a reality in Ireland,” she said.

The only same-sex marriage ceremonies that can take place before the end of the year are those involving couples who have already notified the Civil Registration Office of their intention to enter into a civil partnership. There is a three-month wait to have the application confirmed.

A Government spokesman said a provision had been included in the new legislation to allow those civil partnerships notifications be converted to marriage licences in a “quick and straightforward” manner.

The Department of Justice said civil partnership will, in general, be closed to new couples and eventually become defunct after about six months with only couples who have completed forms, paid fees or been delayed able to register the partnership.

Other reforms include the recognition of same-sex marriages registered overseas. Priests and religious ministers or organisations will not be forced to solemnise a gay marriage.

Tánaiste Joan Burton said the approval of the Bill “represents another staging post on the road to making marriage equality a part of our laws and our reality”.

Irish Council for Civil Liberties director Mark Kelly welcomed the publication of the Bill and said it was the last step in dismantling the architecture of homophobia.

The Gay and Lesbian Equality Network said this was a day thousands of lesbian and gay couples had waited for.

“These final steps to ensure equal citizenship for lesbian and gay people are eagerly awaited,” network chairman Kieran Rose said. “Having waited decades, many couples are counting down the weeks to being able to say ‘I do’ to their loved one.”

Same-sex couples already in civil partnerships will pay a reduced fee if they decide to marry under measures proposed by Ms Fitzgerald.

A fee of €200 must be paid when couples notify a Registrar of their intention to get married in Ireland, but those in already civil partnerships will pay now €50.

“The Minister is working with the Department of Social Protection to make separate arrangements to reduce the fees for civil partners wanting to marry from €200 to €50,” a Government source said.

The move to reduce the notification fee will not be contained in the Marriage Bill but will be brought in as an amendment when the legislation reaches committee stage.

More than 60 per cent of people voted in favour of same-sex marriage in May’s referendum.

There will be some opposition to its enactment in the Dáil and the Seanad. Independent TD Mattie McGrath and Senators Jim Walsh and Ronán Mullen all argued against the referendum. They are due to table amendments to the legislation over the coming weeks.

The legislation was delayed due to a High Court challenge to the outcome of the referendum. Two individuals who brought those cases have since lodged an appeal with the Supreme Court.

President Michael D Higgins signed the result of the referendum into law in late August.

Animal welfare group raises concern over live exports 22:25
FG and FF back transition payment for those retired before qualifying for State pension 22:06
Two men questioned about attack where man was set on fire 22:01
Drew Harris says Garda have necessary firearms capacity 21:53
Scientist says methane from farming should be treated differently to CO2 21:42
SUBSCRIBER ONLY