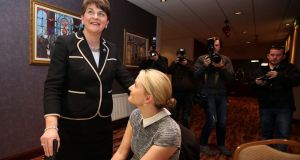 Arlene Foster, who succeeds Peter Robinson, at a hotel in Belfast before being elected leader of the Democratic Unionist Party (DUP). Photograph: Getty Images

The first part of a two-stage drama unfolded in East Belfast on Thursday night when Peter Robinson stepped down and Arlene Foster stepped in as the third leader - and first female one - of the Democratic Unionist Party.

Following North Belfast MP Nigel Dodds’s decision not to take over the leadership – a political gift handed to him on a plate by Robinson – the coronation of Foster has worked remarkably seamlessly.

Robinson wanted Dodds as party leader and Foster as First Minister, partly in the belief that such a duo would unite the DUP’s religious fundamentalist and more moderate wings.

But if Robinson, who steps down as First Minister in early January, could not have the double “dream team”, then he will be very pleased with the single act that is Arlene Foster.

He twice stepped aside as First Minister during crises in 2010 and earlier this year. On both occasions, the Fermanagh Assembly member and Minister for Finance was asked to move up.

Dodds finally decided the stresses and strains of leadership would have been too much. He had the wit to recognise that reality. And he is still deputy leader. He should be reasonably content, though he will harbour regrets.

Now 45, Foster, who was a Girl Guides’ leader in her younger days, is self-confident and ambitious. On January 11th, once she has the seal of office, she will follow in the footsteps of unionist leaders such as Carson, Craig, Brookeborough.

She follows, too, in the footsteps of David Trimble – although she might not be too enamoured of that comparison, given that she quit the Ulster Unionists for the DUP during his time in charge.

She faces daunting challenges. In one of her last acts as Minister for Finance, she signed off on Thursday on the Executive’s budget for 2016- 2017– one that for long looked like it would never be agreed.

Now, she must work daily with former IRA leader Martin McGuinness. The IRA wounded and almost murdered her father, a part-time RUC officer. As a girl she survived an IRA bomb attack on her school bus.

Colleagues say those incidents do not define her and she can and does work practically and fairly amicably with Sinn Féin Ministers including McGuinness.

However, she upset some nationalists with her recent “rogues and renegades” depiction of Sinn Féin and the SDLP, but in what is often a political bear pit that was a harmless enough dig.

Foster can be sharp and aggressive, but she knows the value of good manners in her dealings with the people around her, a trait often lacking in northern politics.

But what of the DUP’s old guard: the harder, Free Presbyterian wing of the party? If it becomes recalcitrant, she will not have the same iron hand with which Paisley and Robinson imposed order.

But the DUP is a curious organisation. Elements within have the reputation, frequently deserved, of being staunch and bitter. Yet while Robinson fast- tracked Foster and others who quit the UUP for the DUP, there was no overt evidence of envy and resentment.

One senior DUP source who would have been viewed as leadership material and a potential adversary of Foster’s, was satisfied she is taking over. “There are no internal worries . . . it will be fine,” he said. Keep calm and let Foster do her work, in other words.

Foster is long enough in the business to realise politics in Northern Ireland seldom runs smoothly but, with others, she will be pleased and relieved her uncontested coronation has gone very smoothly so far.