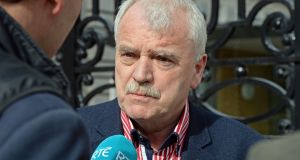 An Independent Minister who sits at the Cabinet table has performed a U-turn on his decision not to pay water charges.

Finian McGrath, the so-called super junior Minister with Responsibility for Disability Issues, changed his mind one week after entering government with Fine Gael.

Mr McGrath said he had consulted with colleagues in the Independent Alliance, members of his local constituency team and Attorney General Máire Whelan before making his decision.

He maintains he has problems with the affordability of water charges and Irish Water as an organisation, but said the recent government negotiations had established a mechanism to review how water services were funded.

Fianna Fáil and Fine Gael reached agreement to establish a commission to examine the future of water charges, but Irish Water itself will not be reviewed by the commission. The agreement between the parties was also that water charges would be suspended.

John Halligan, another member of the Independent Alliance, said he would not pay water charges. Mr Halligan, expected to be appointed a junior minister next week, said earlier this week that his position on the issue “has not changed and will not change”. The Waterford deputy did not return calls last night.

Both TDs have faced pressure from their Fine Gael partners in Government to pay the charges, with Taoiseach Enda Kenny leading the calls.

Mr McGrath – who attends Cabinet as a so-called “super junior” but does not have a vote at meetings – had faced claims from the Labour Party that it was unconstitutional for him, as a Minister, not to adhere to the law and pay his charges.

It is understood he was advised that refusing to pay the charges did not amount to an unconstitutional act and that the decision to settle his bills was largely a political one.

He had said he wanted Ms Whelan to advise on whether there were “any constitutional or legal issues”.

In a statement last night, Mr McGrath said not paying the charges would be a distraction to his other work, adding that he was “determined that this will not be allowed to happen”.

“To that end I will now regularise my situation with Irish Water and pay my charges.” He insisted, however, that the manner in which Irish Water was set up remained “personally unacceptable to me”.

“I’m still deeply sceptical about the motives and the ability of the service to deliver,” he said. “There are also affordability issues and I certainly felt there was a lack of insight demonstrated by the previous government as regards people’s everyday financial struggles.

“I have fought for many issues over the course of my career . . . I know that priorities must be set and I do not believe that my not paying the water charge at this stage will greatly alter the situation for Irish Water.”