Public ballot will not now go ahead in May, having failed to gain support of the four Dublin authorities

Fingal county councillors have blocked Dubliners from voting next May on whether to have a directly elected mayor for the capital.Just six of the 24 members of Fingal County Council voted in favour. 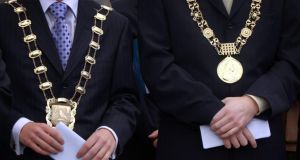 Fingal has voted against the proposal to hold a public vote on setting up a directly elected mayor. Photograph: Bryan O’Brien/The Irish Times

Fingal county councillors have blocked Dubliners from voting next May on whether to have a directly elected mayor for the capital.

Just six of the 24 members of Fingal County Council voted in favour of holding the plebiscite on the mayoral proposal on May 23rd. A yes vote by 12 councillors had been needed for the public poll to go ahead.

Dublin City Council and South Dublin had already voted in favour of the plebiscite being held, but Fingal’s decision means that it cannot go ahead.

The Local Government Bill, published by Minister for the Environment Phil Hogan last October contained a provision that if any one of the four councils votes against holding the referendum, the proposition of having a directly elected mayor for Dublin will be dropped.

Labour councillors Judy Dunne, Mary McCamley, Michael O’Donovan and John Walsh, as well as Independent Cian O’Callaghan and Fianna Fail’s David McGuinness voted for the plebiscite to be held, but 16 councillors voted against and two abstained.

Minister for Local Government Phil Hogan said he respected “the rights of the elected members of each local authority to come to their own decision on important policy matters in relation to their own area.”

He added: “The statutory requirement of a majority of the councillors in each of the four Dublin local authorities being required to support the plebiscite was high, as it was necessary to ensure that there was genuine political consensus amongst the members on their view on the best governance arrangements for the office of directly elected mayor for Dublin.

“It was a matter for the elected members to form their own views, and it is clear that there is not a consensus across the Dublin authorities that would enable a plebiscite to be held.”

South Dublin County Council meanwhile voted overwhelmingly in favour of adopting the resolution. This afternoon the council voted 19 votes in favour, three against with one abstention.

Dún Laoghaire - Rathdown County Council will vote on the proposal this evening, although that result is now irrelevant.