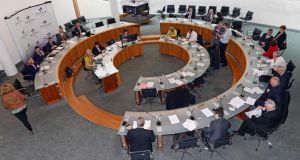 Fingal County Council is second in State to signal intention to cut the rate. Photograph: Eric Luke / The Irish Times

Fingal County Council has become the second council in the State to signal its intention to reduce the local property tax by 15 per cent, following a vote at yesterday’s council meeting in Malahide.

The motion to reduce the tax by the maximum allowable amount, which was put forward by both Sinn Féin and Fianna Fáil, sailed through with 30 votes in favour, seven abstentions and no registered opposition among the 37 councillors present.

There were, however, significant dissenting opinions from Fine Gael, Labour, Green Party and Independent members, who implored their colleagues to defer a policy decision until after the results of an official public consultation process could be discussed.

Although a statement of intention, the vote has no practical implications until the council convenes its budget meeting in September, which could ratify the motion ahead of the 2015/2016 tax year.

Local property tax receipts accounted for €32.3 million in funding for Fingal last year, and such a move would cut almost €5 million from council finances next year if similar figures are recorded.

Fingal council also passed a motion yesterday calling for a plebiscite on a directly elected mayor of Dublin – four months after it scuppered original plans for a public vote.

The motion, put forward by Independent councillor Cian O’Callaghan, was passed amid general consensus from the council members present.