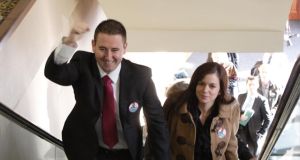 Fianna Fáil councillor for Fingal David McGuinness has resigned from the party.

David McGuinness, who contested the 2007 general election in Dublin West as the late Brian Lenihan’s running mate and two subsequent byelections in the constituency, has previously spoken about running as an Independent in the General Election after failing to win the party nomination.

“Fianna Fáil is a party in denial who continually show they lack direction, solutions or a vision for the future of this country,” he said.

“The party is far too concerned with its own internal considerations, its own self preservation, making excuses and not on the plight of the people that I seek to represent. I am now showing leadership and going solo.”

Mr McGuinness claimed the party had done nothing to rebuild people’s trustbut that Micheal Martin’s leadership of Fianna Fáil was not the key issue.

“Some have made the issue out to be solely about the leadership of the party but the issue at stake is leadership in general,” he said.

“Despite talk of becoming the largest party at local level, Fianna Fáil support at local level is actually lower in percentage terms in Dublin than ever before and no one ever mentions the disastrous European Election results across Dublin and Ireland.”

In February, Castleknock-based councillor Jack Chambers won a resounding victory in the Fianna Fáil selection convention in Dublin West, defeating rival Mr McGuinness by a ratio of two to one.

After the decision Mr McGuinness, who is based in the Blanchardstown side of the constituency, said the defeat was hard to swallow after standing as a candidate for the party in two byelections when nobody else was prepared to do it, and he had stuck by Fianna Fáil through thick and thin.

“There’s no doubt about it. There’s a class divide in Fianna Fáil and I’m clearly on the wrong side of the tracks. That was clearly evident in Dublin West,” he said. “I am now doing a lot of soul searching and Fianna Fáil and me may part ways.”

A party source said of Mr McGuinness’ move on Thursday: “It’s not surprising. It’s been coming. The fallout from the convention was severe.”

There have been two byelections in the constituency since the last general election. The first followed the death of Mr Lenihan and was won by Patrick Nulty, then of Labour. The second byelection followed Mr Nulty’s resignation.

Mr McGuinness said he believed voters in Dublin West would support his decision to run as an Independent.

“While I have many friends within the Fianna Fáil party, I never got involved in politics to ensure the future survival of the party,” he added.

Last month, Patrick McKee who was elected as a city and county councillor for Fianna Fáil in the local elections, defected to Lucinda Creighton’s new Renua Ireland party.