Fine Gael warns against complacency on Yes side

‘Hopefully now this will have a happy ending’ says Simon Coveney 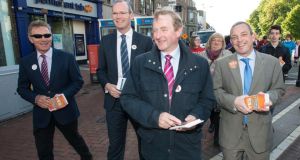 Taoiseach Enda Kenny and Simon Coveney met with members of Fine Gael LGBT this morning as they canvassed for a Yes vote in the upcoming Marriage Equality referendum. Photograph: DAVE MEEHAN

Fine Gael’s director of elections for the same-sex marriage referendum Simon Coveney says he’s hoping for a “happy ending” to the campaign but has warned against complacency on the Yes side.

The Minister for Agriculture was canvassing with Taoiseach Enda Kenny on Grafton Street in Dublin on Wednesday morning.

“So hopefully now this will have a happy ending, if you like, for a community that are desperately looking for recognition and have been passionately campaign for that,” Mr Coveney said.

“But, look, I won’t take that for granted. I’ve been around politics long enough to know that you can get a fright and that sometimes results can go in a way that you’re not expecting.”

Mr Coveney said he “wouldn’t be presumptuous enough” to make a prediction about the vote on Friday.

He said a new generation of voter had got involved in the campaign which was something he had not seen in 15 years in political life.

“We’ve had a lot of cynicism in politics in the last number of years. This campaign has introduced something new to politics that we haven’t seen for quite a long time, which is fresh, which is idealistic, which is about ending discrimination.”

He said people had to come out and vote to make change happen.

The Minister noted that all political parties had “set aside their differences” to campaign for a Yes vote.

Some on the No side were “looking to confuse people, to worry people, to spook people”.

The referendum was not about surrogacy or adoption, he said.

He said gay people had been “locked out” of the stability that marriage brought.

“To lock them out simply continues to brand gay people as different, as lesser in their relationships, in who they are and who they choose to love,” he said.

“I cannot stand over that any longer and I won’t.”