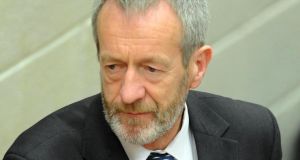 Fine Gael was last night celebrating a much needed morale boosting electoral victory when sitting MEP Sean Kelly from Kerry was joined on the victory podium in the four seat Ireland South constituency by Cork based Senator Deirdre Clune.

Mr Kelly took the third seat on 121,566 votes but without reaching the quota of 131,500 and was joined in booking a ticket to Strasbourg by Ms Clune after she overtook their running mate, Simon Harris TD from Wicklow to take the final seat on 74,307 votes.

Ms Clune had been trailing Mr Harris from the first count when he polled 51,483 first preferences compared to her opening tally of 47,453 but she gradually began to reduce the deficit over the course of 12 counts spread over four days at Nemo Rangers GAA Pavilion in Cork.

Critical to Ms Clune’s success was the 10th count when she picked up more than 6,500 transfers – over 2,000 more than Mr Harris obtained — from outgoing Labour MEP, Phil Prendergast’s 42,213 papers to overtake her running mate and move ahead of him for the first time in the race.

Ms Clune increased her 1,353 lead over the Wicklow TD on the 11th count when she garnered over 4,000 transfers from Independent candidate, Diarmuid O’Flynn, campaigning on a Burn the Bond Holders ticket, compared to just over 2,500 transfers which went to Mr Harris.

At that stage, there were just four contenders left in the race to join Fianna Fail poll-topper, Brian Crowley who had come home comfortably on the first count with 180,829 votes and Sinn Fein newcomer, Liadh Ni Riadh who was elected on the fourth count after polling 125,309 on the first count.

Heading into the 12th and final count, Mr Kelly was comfortably ahead on 113,311 with Ms Clune on 69,009 and Mr Harris on 66,061 with all three comfortably clear of the backmarker, Fianna Fail’s second candidate, Kieran Hartley on 64,357 votes.

Speaking afterwards, Mr Kelly expressed his satisfaction with the party success in Ireland South. “There was a strategy to deliver two seats and we delivered here — unfortunately we weren’t able to do it in Ireland North West and I want to pay tribute to my good friend, Jim Higgins who didn’t make it over the line.

“I’m looking forward to working with Deirdre Clune who comes from a family involved in Fine Gael for generations while I want to also pay tribute to Simon Harris who put in a great performance and has a great future in Irish politics and I look forward to seeing him go upwards and onwards.”

Ms Clune admitted that she was both “humbled and relieved” to take a second seat in Ireland South. “It was a bit of a rollercoaster of a count - it was a hard place to be when I was 1,500 votes down last night but the hard work where we visited every town and village paid off in the transfers.

“I’m disappointed for Simon but obviously there can only be one winner but we’ve spoken and I’ve thanked him for putting in such a strong campaign because it definitely contributed to my election today and I look forward now to representing the people of Ireland South with Sean Kelly.”

Mr Harris congratulated both Mr Kelly and Ms Clune and said they would both have his support in representing Ireland South. “I really enjoyed the campaign, I was humbled by the support I received and I look forward to returning to Dail Eireann and giving voice to the many issues raised with me.”

Taking two seats out of four in the constituency with 27.74pc of the vote marked a good result for Fine Gael after what was a trying weekend in the local elections while Sinn Fein were also pleased with their success in taking their first ever seat in Ireland South on 19.05pc.

Meanwhile the election must have been greeted with mixed feelings by Fianna Fail. Mr Crowley’s vote of 27.42pc almost matched the entire vote of Fine Gael but the failure to manage his vote getting ability meant that they missed out on a second seat despite a party vote of 32.03pc.

For Labour, its performance in Ireland South mirrored its poor showing in local elections with the party taking just 4.61pc – the same as Independent Diarmaid O’Flynn and only marginally ahead of Grace O’Sullivan of the Greens who achieved a respectable 4.23pc on her first electoral outing.