Up to 3,000 party supporters due to attend party’s ardfheis at Citywest Hotel 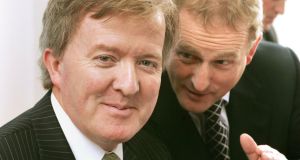 Fine Gael may review the procedures it uses for selecting election candidates in light of a court case taken by former minister of state John Perry. Mr Perry threatened to call Taoiseach Enda Kenny as a witness during the proceedings. Photograph: Matt Kavanagh/The Irish Times.

Fine Gael may review the procedures it uses for selecting election candidates in light of a court case taken by former minister of state John Perry.

The party’s ardfheis, which takes place in Citywest Hotel and is expected to be attended by some 3,000 delegates, is to consider Fine Gael’s procedures for selection conventions in a motion proposed by the party’s executive council.

This follows a challenge taken by Mr Perry against the party over a selection convention at which he failed to secure a place on the constituency ticket. He threatened to call Taoiseach Enda Kenny as a witness during the legal proceedings.

Mr Perry had claimed the convention result in Sligo/Leitrim should be set aside because of serious irregularities in how it was run. He won the court case and was added to the ticket.

Other motions to be debated include one urging the party to confirm its commitment to the abolition of the Universal Social Charge, another to introduce measures to reduce the cost of childcare and one on parental leave.

There are also calls for the Minister for Justice Frances Fitzgerald to conduct a review of sentencing policy for serious and repeat offenders and to crackdown on dissident activity and criminality in the border area.

In his address to members in the programme for the weekend Mr Kenny said Fine Gael’s plans to fix the economy has worked.

“It was a plan to fix the banks and our public finances and get our country working again. Thanks to the hard work and resilience of the Irish people, we are seeing a recovery taking hold,” he says.

“Today we are the fastest growing economy in Europe, 135,000 more people are back to work and unemployment is down from a peak of over 15 per cent to 8.8 per cent.”

The Taoiseach says it should not be taken for granted that stability and recovery will continue in Ireland, noting that it “ remains fragile and incomplete”.

“Not everybody is feeling the benefit of the recovery in their daily lives. Fine Gael has a plan to keep the recovery going and to make sure that recovery is felt inside the door of every [home,” he adds.

“It is a long-term economic plan based on three simple steps to: Create more and better jobs, make work pay and invest in better services.”

The Taoiseach urged members to remember the key message of the party is to “keep the recovery going based on stability and progress as opposed to instability and chaos”.