Internal review not expected to be ready until April 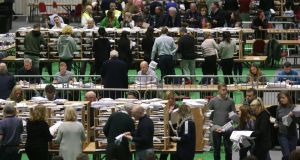 Counting of votes the 2020 general election at the RDS. Photograph: Damien Eagers

Fianna Fáil’s internal review into its dismal performance in the general election is not expected to be ready until April, 14 months after the February 2020 poll.

The seven-person review group, chaired by Minister of State Seán Fleming, is understood to be nearing the completion stages of collecting feedback from members and public representatives, with the group then due to begin discussing the information and reaching conclusions.

However, several party TDs have expressed scepticism about the period of time that has elapsed since the election and questioned if the report would have any merit.

None attributed any blame to Mr Fleming. He was not given the task of chairing the internal examination until mid-September and had to wait a further month before he was in a position to assemble the full team.

Since then the group has conducted online surveys and began interviewing a representative sample of members, as well as samples of the 80 candidates in the general election, and of the 400 people who represented the party in the local elections in 2019.

It is understood Mr Fleming has also spoken to former taoisigh to ascertain their views on what went wrong for the party last year.

Fianna Fáil went into the election with expectations of increasing its tally from 44 to 60 seats. In the event it lost six seats, and ended up with 38, marginally more than Sinn Féin and Fine Gael. Indeed, had Sinn Féin run more candidates it is likely Fianna Fáil would have fallen to second-largest, or even third-largest party.

Mr Fleming, a TD for Laois and a former chair of the Public Accounts Committee, is know for having an independent cast of mind. His team has been told not to pull any punches. The report is expected to be forward-looking, looking at ways to ensure Fianna Fáil does not repeat the mistakes of last year.

“I am worried about the length of time it has taken,” said one TD. “So much has moved on. It is regrettable it has taken so long.”

Another TD said it did not really require a review to know what happened but it might help for the “bald facts” to be stated.

The TD, speaking privately, said the leadership including the Taoiseach Micheál Martin had no urgency or desire to hold an inquiry.

“We all know what happened. We adopted a conservative approach. We had a poor manifesto. We concentrated the election around one person, who performed poorly. There was no sense of an alternative team or an alternative government.”

One of the former TDs who lost his seat said the report could have huge merit. “It is not going to change the fact that my colleagues and I lost our seats. What it can do as a document is give a warts-and-all appraisal of all the deficiencies and mistakes, including those of the leader, and make sure they are never repeated.”

The South MEP Billy Kelleher wrote to the Taoiseach in September urging an independent inquiry of a far wider scope, warning that otherwise the party may go into terminal decline.

“The last general election was incredibly difficult for our party and the outcome left many of us deeply disappointed,” he said.

He said any review can leave nothing off the table and “if uncomfortable truths are unearthed, we must deal with them”.

A deep-rooted examination was needed, he argued, of the party’s organisation; communications; campaigning; membership and policy platform; as well as the leadership’s relationship with the party.

The Taoiseach conceded for the first time over the weekend that Fianna Fáil’s confidence and supply agreement with Fine Gael between 2016 and 2020 had “gone on too long” from his party’s point of view.

He defended extending it for a further year amid protests from his own colleagues but accepted it “blunted” his party’s hopes in the general election.

Mr Martin, in an interview with the Mail on Sunday, also said complacency had seeped into the party ahead of last year’s general election but denied he himself had been complacent, suggesting he was aware of the dangers.

He said the party could have won eight additional seats but lost out by very narrow margins. “The lesson is that every election campaign is different and every election has its own dynamic. In the modern era with social media that seems more true,” he said.

He also said the election took on a life of its own in the second half of the campaign ahead of polling day on February 8th.