Fianna Fáil passes a motion at its ardfheis opposing any effort to diminish the constitutional right to life of the unborn. 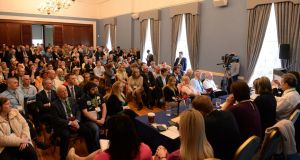 Full room at the Resolutions on Health meeting at the Fianna Fáil ardfheis, in the RDS, Dublin. Photograph: Dara Mac Dónaill/The Irish Times:

Fianna Fáil has passed a motion at its ardfheis opposing any effort to diminish the constitutional right to life of the unborn.

Two conflicting motions were tabled at the conference on Saturday including one allowing a woman the right to choose to have an abortion.

However, the majority of members spoke in favour of protecting the right to life of the unborn in the Constitution.

Delegate Róisín Bradley from Co Donegal said the party should focus on the “life-affirming vision at the heart of the Eighth Amendment” rather than looking at ways to dismantle it.

Delegate Martin Breen said he and his wife were told their child would not survive outside the womb and should seek abortion services abroad.

Mr Breen told the conference his daughter was born on November 12th, 2014, with Down syndrome and is a “perfectly healthy girl”.

Everyone should be given an opportunity at life, said Mr Breen, adding that Fianna Fáil was a party which supported an Ireland for all including the unborn.

Former TD Máire Hoctor criticised the Fianna Fáil members on the Oireachtas committee on abortion for not speaking up for the rights of the unborn.

Former senator John Hanafin said the party would stand for what was right and must seek to protect the rights of the unborn.

Mr Hanafin said the media coverage of the debate had been skewed in favour of the pro-choice movement.

A handful of delegates spoke in support of the repealing the Eighth Amendment of the Constitution.

The London Cumann proposed a motion to respect a woman’s right to choose in the forthcoming referendum and allowing women access to possible routes to the best outcome.

Blackrock councillor Kate Feeney said the Eighth Amendment forces women to travel to the United Kingdom for what she described as healthcare.

Dún Laoghaire councillor Jennifer Cuffe said she could not stay silent on the matter for much longer.

Ms Cuffe said women were travelling to the UK for abortions and Fianna Fáil “cannot turn our backs on it anymore”.

Food & Drink Quiz: Where would you be served bunny chow?