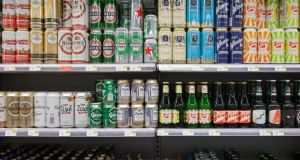 Fine Gael Seanad leader Regina Doherty has supported a call for the Government to introduce alcohol minimum-unit pricing instead of waiting until Northern Ireland does so because that could take years.

She said “we talk about doing things when the time is ideal” but because of the delays in the North “perhaps we should not wait. We should lead by example as we have done very successfully with other public health measures.”

The former minister backed Fianna Fail Senator Ollie Crowe who warned that it could be well over two years before Northern Ireland is in a position to introduce minimum unit pricing.

Mr Crowe said Ireland could afford to wait that long “given the impact alcohol is currently having”.

Fine Gael Senator Paddy Burke it could be introduced now “when travel to the North is limited. It shouldn’t be beyond the bounds of possibility for us in the South to introduce it.”

Minimum unit pricing aims to combat harmful drinking. But the State wants it to be introduced simultaneously on both sides of the Border to ensure shoppers do not go North for cheaper alcohol.

It is the main element of the Public Health (Alcohol) Bill passed more than two years ago, and described internationally as model legislation. It is a set cost below which alcohol cannot be sold and will mean the lowest price for a standard drink is €1 which will affect mainly drinks sold cheaply in supermarkets with strong alcohol content.

Its implementation was delayed to ensure synchronicity in its implementation. But a substance misuse strategy being developed by the North’s Minister for Health Robin Swann has been delayed by the pandemic and a public consultation process on the issue has yet to be completed.

Mr Crowe pointed to Scotland which introduced minimum unit pricing two years ago and in that time “the rate of consumption has been at its lowest in 25 years. More importantly, the number of hospital admissions for liver disease among the lowest income groups has been significantly reduced.”