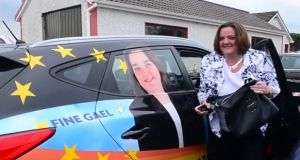 She was declared elected at St Dominic’s GAA centre in Kenagh, Co Longford, at the end of the seventh count when she had comfortably outpolled the remaining candidate in the race, Fianna Fail’s Aengus O’Rourke, by 20,058 votes to 14,581.

This followed the distribution of the 11,254 votes secured by Sinn Fein’s Paul Hogan, who noted that his party’s vote had increased by 75 per cent since the general election.

Ms McFadden’s election was in little doubt from the time the first boxes were opened yesterday morning. She polled consistently well throughout the constituency and it was just a matter of time before the various counts were completed to pave the way for her victory.

Ms McFadden, outgoing mayor of Athlone, described her victory as a “bitter sweet’’ moment, given the death of her sister, Nicky, from motor neurone disease last March, which caused the Dáil vacancy.

She said her priorities as a new TD would be the creation of jobs for Longford-Westmeath. “The economy is recovering, but people are not feeling it as they should,’’ she added. “It seems to me that the recovery is happening more in Dublin than down the country.’’

She said she believed the Government was doing a good job and making unpopular decisions in the best interests of the country.

Despite having a TD in the constituency, Willie Penrose, the Labour candidate, Denis Leonard, polled poorly, reflecting his party’s declining fortunes nationally. He secured 3,290 first preferences and was eliminated on the second count.

Mr O’Rourke, son of former TD and minister Mary O’Rourke, said he was not concerned about Sinn Féin’s rise. “I am more concerned about my own and Fianna Fáil’s position,’’ he added. “We are going to continue to challenge the Government for the rest of its lifetime as we we have done up to this.’’

He said people felt bewildered and betrayed by the Government parties because of broken promises and U-turns.

Mr O’Rourke said he would now focus on his membership of Westmeath county council, to which he was elected yesterday.