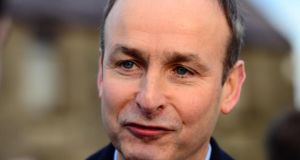 Michéal Martin: Any suggestion ‘the truth of the Taoiseach’s involvement in the departure of Martin Callinan will now potentially not be known until after the general election is simply outrageous and unacceptable’.

The report from Mr Justice Nial Fennelly into the circumstances surrounding the retirement of former Garda commissioner Martin Callinan must be published immediately, Fianna Fáil leader Micheál Martin has said.

Mr Martin made his comments after Mr Justice Fennelly wrote to Taoiseach Enda Kenny informing him he would not distribute his findings on Mr Callinan’s retirement until after the conclusion of the High Court case involving Ian Bailey.

The Government asked the judge to investigate the recording of phone calls at Garda stations over a 30-year period and to examine issues around Mr Callinan’s retirement.

Mr Martin said Mr Kenny “could have simply come into the Dáil and given a proper account of what happened” but chose not to do so.

Mr Kenny sent Brian Purcell, the former secretary general of the Department of Justice, to Mr Callinan’s home the night before his retirement.

Mr Martin said any suggestion “the truth of the Taoiseach’s involvement in the departure of Martin Callinan will now potentially not be known until after the general election is simply outrageous and unacceptable”.

He said questions surrounding Mr Kenny’s involvement could have been answered in the Dáil. “But the Irish people are going to be asked to accept the proposition that despite these most serious questions hanging over the leader of Government . . . we cannot now read the relevant report?”

A spokesman for Mr Kenny said: “It is for the judge to decide the manner in which he will conduct the investigation and that is entirely appropriate. It is up to Deputy Martin to question that fact if he sees fit.”